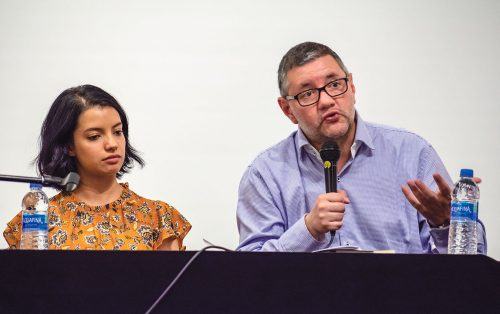 Eight poets from Cuba, Spain, the U.S. and Colombia were featured at the California Poetry Festival, the first event of its kind to be put on by the University of La Verne.

The festival was celebrated over a period of two days, with events held in the Hanawalt House courtyard and at the dA Center for the Arts in downtown Pomona.

The first day of the festival, which was held at the dA Center, included multiple poetry readings in Spanish, which were also translated into English, immediately followed by a Q&A and book signings by the poets.

Poetry books from the featured poets were displayed at the entrance of the event.

Gabriela Capraroiu, professor of Spanish, opened the panel by thanking the poets who came from around the world to speak to both the local community and ULV students.

“I just want to give recognition that this is the first ever poetry festival we are holding,” Capraroiu said.

She then went on to discuss what she said was the focal point of the festival, the importance of language translation.

She did so by referencing poet and ULV alumna Guadalupe Robles and the struggles she had once faced with language translation.

Robles grew up in Zacatecas, Mexico, and her poems won the 2015 Undergraduate Creative Writing Contest, and were published in the ULV’s Prism Review.

Robles talked about the challenges of becoming bilingual.

“There’s a completely different world in each language, and as a Spanish teacher that’s one of the hardest things (to) explain to my students that their American world doesn’t necessarily translate to Spanish.”

Poet Gordon McNeer, who is a Professor of Spanish at the University of Georgia, explained how he teaches his students to translate languages to the audience.

“I always tell a student to read it with love, compassion, understanding and to get a feel for the poem and realize the poem has a voice, and deal with that object and translate it to another person,” McNeer says.

McNeer then read excerpts from his book, and afterward translated it to English, as the other poets did the same after their individual readings.

Josephs discussed how he got his inspiration for Spanish poetry.

“I was speechless from a recital that someone recited a poem in Spanish and I wanted to know why I was affected so deeply by this poem,” Josephs said “Later on, this got me out of theater and acting and I pursued the beautiful work of language translation in poems.” Josephs said.

At the close of the inaugural event some guests expressed interest in making the festival an annual occurrence.

“Thank you to Gabriela for everything and just know we’re coming back next year,” McNeer said.