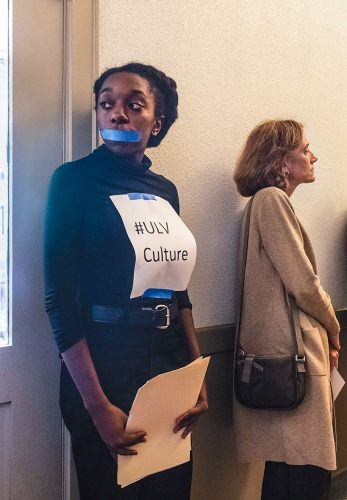 Jasmine Marchbanks-Owens, ULV graduate student and alumna, participates in the silent protest Thursday outside of President Devorah Lieberman’s office. University Chaplain Zandra Wagoner joined Lieberman after the protest to discuss the concerns that were raised./ photo by Layla Abbas

On Thursday more than 20 students with blue tape covering their mouths gathered outside of President Devorah Lieberman’s office in Founders Hall, demanding a list of changes to address the University’s treatment of minority groups on campus.

The list included:
• A change in the faculty and employee handbook that addresses training around diversity, inclusion, neurodiversity, mental health, gender, disabilities, sexuality, socioeconomic status;
• A system that enforces these diversity competencies and is a part of all evaluative processes and any merit pay increases;
• A change in the current Eurocentric, patriarchal curriculum to match the diverse backgrounds of students;
•The addition of “cultural competency” in the faculty promotion and tenure criteria.

“I can commit to that,” Provost Jonathan Reed said after listening to the demands.

“As far as commitment, when can we expect to see these policies be enacted in each department?” Jasmine Marchbanks-Owens, ULV graduate student, asked Reed.

The protest was an organized “silent protest” for which participants would take turns removing the tape over their mouths to share their experiences at the University.

Protestors would then intermittently remove all of the tape and chant: “The institution has failed us,” in unison.

Reed said he wanted to make sure to give a realistic answer, so he asked the students if he could have a few days to consult with Chief Diversity Officer Beatriz Gonzalez and other faculty and staff on campus.

Reed then said he would schedule a meeting for 2 p.m. today to meet with students to present a plan to address their demands.

“When you say the end of the week, I just want to clarify that you don’t mean tomorrow, you mean next Friday,” Lieberman asked Reed.

“No, I meant tomorrow,” Reed said.

“Thank you for holding your commitment,” Marchbanks-Owens told Reed. “Although you’re only in charge of curriculum.”

“As far as the other departments, that would be you,” Marchbanks-Owens then said to Lieberman.

Lieberman said she would also commit to answering the demands of the protestors.

Heidy Contreras, associate professor of biology and chair of the faculty diversity committee, said many of the issues the students were demanding were already being discussed by the committee.

Contreras said the committee has discussed a variety of ways to educate and enforce the diversity and inclusivity values at the University.

One of the proposed options is a three-year program, which would require new faculty to undergo diversity education during their probationary period.

In their first year, faculty would attend informational sessions on diversity topics. The following year would be spent on a project highlighting diversity issues.

Contreras said this approach would encourage new faculty to buy into the University’s values. 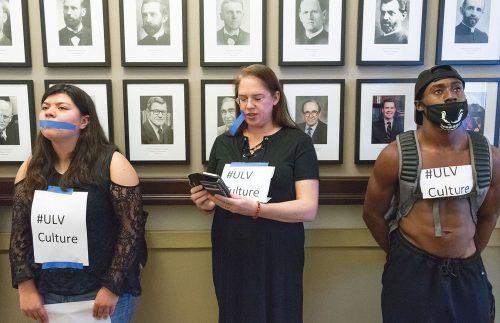 An unidentified student, education graduate student Suzanna Bratzler and senior psychology major Dae’John Logan take part in the protest held outside of President Devorah Lieberman’s office Thursday. The protest by more than 20 students demanded diversity and inclusivity training be a mandatory component to the faculty and employee handbook. / photo by Layla Abbas