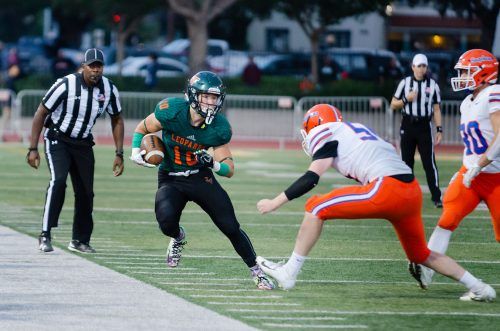 Junior wide receiver Grayson Kline moves to dodge a tackle as he runs down field to score a touchdown in the Homecoming game against Pomona-Ptizer Saturday. The Sagehens beat the Leopards 34-7 / photo by Katelyn Keeling

Ortmayer Stadium was at full capacity with an electric, energetic Homecoming crowd as the Leopards went up against the Pomona-Pitzer Sagehens in their second Southern California Intercollegiate Athletic Conference game of the season Saturday.

But La Verne’s sloppy play handed Pomona-Pitzer a 34-7 win. The Leopards’ penalty woes and inability to score in the red zone haunted them throughout the game, along with their trouble stopping Pomona-Pitzer’s two quarterback system in the second half.

“It’s definitely disappointing because we know we can play much better,” said junior cornerback Jordan Peevy. “We have the talent, we have the pieces. It’s just a matter of putting it together. It’s the little things.”

La Verne’s game plan focused on stopping Pomona-Pitzer’s passing game since senior quarterback Edward Sias was ranked second in conference with 213.8 yards per game and a 56.6 completion percentage coming into the game.

“The game plan was to go in and put together a running game, control the clock and win the football game,” head coach Chris Krich said. “It also was to try to slow down their two-quarterback system with their defense and try to win all three phases of the game.”

The Sagehens began the game after receiving the kickoff and returning it to their own 26-yard line.

Three La Verne penalties moved the Sagehens’ upfield, resulting in an eight-yard touchdown run by Odermann out of the wildcat formation to put them up 7-0 after the extra point.

La Verne bounced back with the help of its running game from junior running back James Gonsalves and senior running back Martaveous Holliday, converting back-to-back first downs on the Sagehens’ 40-yard line.

Senior quarterback Josh Evans passed the ball to sophomore wide receiver Nate Sagastume to complete the 33-yard touchdown off a slant route and tie the game, 7-7.

But Pomona-Pitzer stopped La Verne’s momentum, with sophomore defensive back Tate Tussing immediately returning a 96-yard kickoff for a touchdown to give the Sagehens a 14-7 lead.

Pomona-Pitzer started the second quarter on the La Verne 25-yard line and jumped immediately to the 11-yard line after a completion to sophomore wide receiver Win Hunter. The La Verne defense was able to hold the surging Sagehens to a field goal, increasing their lead to 17-7 with 11:45 left in the half.

As the first half drew to a close, the Sagehens were seconds away from being shut down at midfield, but a costly pass interference by the Leopards moved them to the La Verne 13-yard line. The La Verne defense held its ground and stopped the Sagehens’ run game to turn it over on downs and end the first half down, 14-7.

“Individually, we were doing our jobs but we got to play together,” sophomore kicker Diego Garcia said. “We’ve got to get all three phases of the game together and if we can get those three rolling, no one is going to stop us.”

The second half began with immediate pressure from the La Verne defense, led by senior defensive end Austin Brown, causing a three-and-out for the Sagehens.

Pomona-Pitzer returned the favor and stopped La Verne’s passing game, giving the ball back to the Sagehens after a three-and-out.

With 9:14 left in the third quarter, sophomore safety Andrew Camargo recovered a fumble to give the ball back to the Leopards on their own 47-yard line.

However, the Sagehens got the ball back in the next possession after the referees ruled that junior wide receiver Grayson Kline lost control of the ball as he hit the ground.

On the Sagehens’ next drive, Sias converted a 39-yard touchdown pass to Hunter from La Verne territory to increase their lead to 24-7.

La Verne was able to hold the Sagehens to a field goal in their next possession to make it 27-7 at the end of the third quarter.

The Leopards showed their fatigue and loss of momentum, as they continued to receive several penalties on both sides of the field throughout the fourth quarter. With 12:36 left in the game, senior safety Derrin Hooks picked off Sias to stop the Sagehens from scoring once more.

However, Taylor gave the ball back after an interception and 71-yard return by Tessing. Odermann ran up the middle for a 4-yard touchdown to seal the victory for the Sagehens, 34-7.

The Leopards finished the game with 15 penalties for 129 yards.

Sagastume said that while the loss was frustrating, he is solely focused on their next opponent.

“We’re not worried about league, who’s playing who, who’s playing after, who’s winning and losing,” Sagastume said. “We just got to focus on ourselves, on Whittier right now and just keep grinding.”

The Leopards will travel to Whittier to face the Poets at 5 p.m. Saturday in search of their first win.