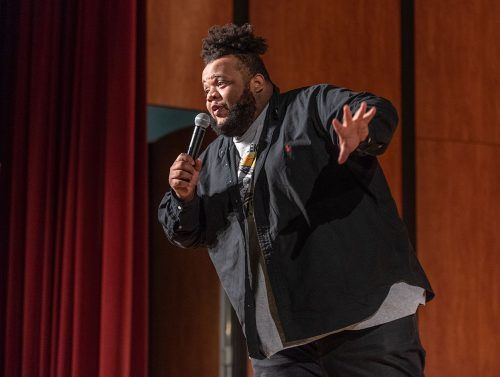 Comedian Kiry Shabazz performs standup comedy on Tuesday night in Morgan Auditorium. His jokes consisted of stories of being a former Taco Bell employee while he was a teenager, and reflections of his childhood while growing up with his mom. Before performing at La Verne, Shabazz had been featured on “The Tonight Show with Jimmy Fallon” and was the winner of the 14th annual StandUp NBC Competition in 2017. / photo by Claudia Ceja

Around 50 students gathered for a laugh Tuesday night at the Campus Activity Board’s Comedy Night in Morgan Auditorium.

Kiry Shabazz, once featured on “The Tonight Show with Jimmy Fallon,” as well as the 2017 winner of the StandUp NBC Competition, was the special guest comedian.

“I researched the campus like I always try to do beforehand to get a general vibe of what it is,” Shabazz said. “At this school I was told that I could be more loose and free, so I could test those limits with the atmosphere, like if it’s liberal, conservative, political.”

Shabazz said that he enjoys performing on college campuses because it is where he can test the stereotype of political correctness at universities.

“I feel that college campuses get too much of a bad rep for being too politically correct; I haven’t experienced that,” Shabazz said. “Most of us, especially in this area, tend to be more woke and want to hear different things.”

He told the audience about how his approach to college campuses differs from clubs because every school is distinct in terms of political correctness and sensitivity restrictions.

While Shabazz briefly joked about his political beliefs and connection to the Founding Fathers’ wardrobe choices, he followed up with a serious side note as he left the audience; a reflective moment regarding his feelings toward racism.

“I just think it’s wrong where we disrespect the fact that we’re culturally different,” Shabazz said. “Where you come from is what makes you different, not your race.”

The show opened with Shabazz making an attempt to learn about La Verne student life through audience interaction.

Later in the show, Shabazz began to recount being tempted to become a vegan through cookies and religious booths, as well as his experience as a former Taco Bell employee.

Shabazz’s explicit jokes expanded to gospel rap and personal roommate horror stories, with a major focus of his set being engagement with the students.

Zachary DuBois, sophomore psychology major and CAB comedy chairman, was satisfied with the turnout and his ability to get Shabazz to perform on campus.

“I got into contact with his agent and we discussed prices and negotiated how he would get here, what he would need, and it turned out that he lived in Los Angeles,” DuBois said. “We pulled through and I’m just glad that everyone had a good time, including myself.”

Daniella Martinez, sophomore educational studies major and CAB committee member, was excited about the high turnout, and for students to enjoy the event.

“It’s really nice to see people come out and actually take part in the activities that the school puts on,” Martinez said. “Everybody was engaged and there was a lot of people laughing, going along with all the jokes.”

Shabazz maintained an informal question-and-answer performance throughout the night, which kept sudents steadily engaged as they shared answers and stories with the comedian.

“He was a bit political but not overbearing, genuinely funny and is a young adult like us for him to better relate and be explicit,” Ortiz said. “CAB did a great job picking a perfect comedian and promoting the event.”