By Nicolette Rojo, Veronyca Norcia on October 12, 2018 in LV Life 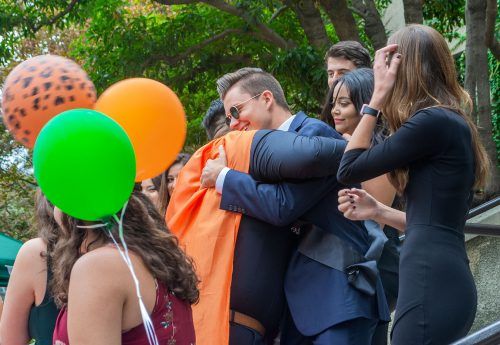 Clubs, Greek organizations and departments held activities at their booths, which were designed to fit the Homecoming of Angels theme, while showcasing what they have to offer on campus.

Bob Dyer, alumnus class of ’68, said that he always attends the parades not only for his love of the bands, but also to catch up with fellow alumni in his class.

“I like bands and music, waving to the president and her husband and seeing people I know is pretty fun,” Dyer said. “I’m a regular, so I’ll keep coming back. I’m a Leo for life.”

“It was a lot of fun to bring Steve Morgan back as the associated student body president for the class of 1968, 50 years ago,” Ogden said. “He’s much respected as president emeritus of the University of La Verne but we wanted to celebrate him as part of our class.”

Ogden is also on the alumni planning committee for Homecoming and helped plan Homecoming weekend.

“We meet, talk, think about what worked well last year and seek to make improvements,” Ogden said. “We honor the decades of alumni, students new to La Verne and their parents to give them more information on what’s being studied and what their expectations can be.”

Fourteen clubs participated in the parade and many students proudly represented their individual organizations.

Senior speech communication major Zoe Meshenberg participated as a tribute and way to give back to the A Cappella Barbershop Club.

“We really wanted to do justice for the club because it has done so much for us,” Meshenberg said. “We felt it was really important to make tributes to everything we could and it’s senior year.”

“The best part was the cheers from everybody as we’re walking because we worked hard and it shows,” Paschal said. “It was worth it.”

For many organizations, the parade was an opportunity to showcase their hard work on their floats.

It was also a competition amongst each other since ASULV awarded a first-place prize of $900 to the organization with the most creative float.

The Sociology, Anthropology and Criminology Club came in first place for their depiction of a mammoth found in the La Brea Tar Pits and Museum, which is made of paper mâché except for its spine.

“I’m really happy that all of the effort paid off and that our club is doing well, especially that it’s such a large department,” said Miriam Rangel, senior anthropology major. “We have a lot of majors, so it’s nice to see people come together, putting a lot of effort into something.”

“Greeting people and spreading awareness about our club during the parade was really nice.”