By Campus Times Editorial Board, Danielle De Luna on November 9, 2018 in Editorials, Opinions 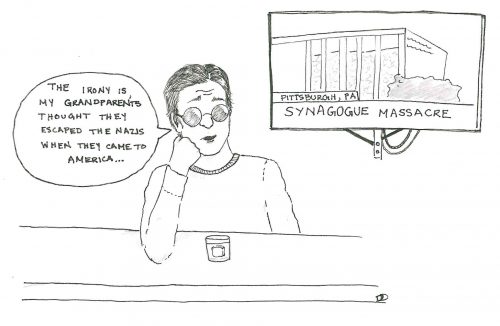 There is a misguided idea held by some Americans that racism and bigotry no longer exist in this country.

But today racism is flagrantly displayed out in the open on sites like 4chan, The Daily Stormer and Stormfront. The latter is an American-based “white pride” website that popularized the term “white genocide,” calls its constituents the “embattled white minority” and advocates for the genocide of Jews.

The people on these boards are so cognizant of the disgust their words elicit in “the real world,” they hide behind anonymous usernames in an echo-chamber of hatred. They speak of their hatred for Jews. And when one of their ranks – emboldened by the collective vitriol – murders people in cold-blood, they talk about the incident as if it were an understandable response to some fictional Jewish agenda.

On election day Tuesday, Arthur Jones, a self-proclaimed Nazi and Holocaust denier, received more than 50,000 votes in Illinois. This, less than two weeks after the synagogue massacre in Pittsburgh that left 11 people dead.
The unfortunate truth is such hate crimes are not new.

The police officers who turned hoses on non-violent African Americans marching for civil rights, and the Congress members who opposed the Civil Rights Act didn’t just forget their racist ideologies when civil rights were granted.

They continued in their positions of power and status that people of color had no way to access, moving their racist ideologies from out front where it was now illegal to deny equal rights, to behind closed doors.

As time passed, racism has been pushed further out of the zeitgeist.

It never went away, though, but more-or-less existed underground.

Police officers who did not have to treat African Americans with equal protections under the law, now could no longer openly discriminate. So they found other means, like disproportionate uses of force.

Ask any person of color.

For the past two decades there has been plenty of anti-Islamic rhetoric focused on the threat of foreign-born terrorism. And the grumblings and whispers previously only uttered in safe social circles or around the dinner table became gradually louder during Barack Obama’s presidency. Systemic oppression was not able to prevent a man of color from rising to the highest office in the land.

Today we’re experiencing the vociferous backlash as hate has bubbled to the surface and championed by voters who brought Donald Trump to power in 2016.

Trump led the birther movement with the racist premise that a person of color must have perpetrated a fraud to land such a position of power.

Tribalism may be intrinsically human. It can be wielded as a threat or we can seize its power. Let us be sure we are members of a tribe to be proud of: one that welcomes everyone, one that listens and shares, one that recognizes strengths in diversity, one that represents our shared humanity.