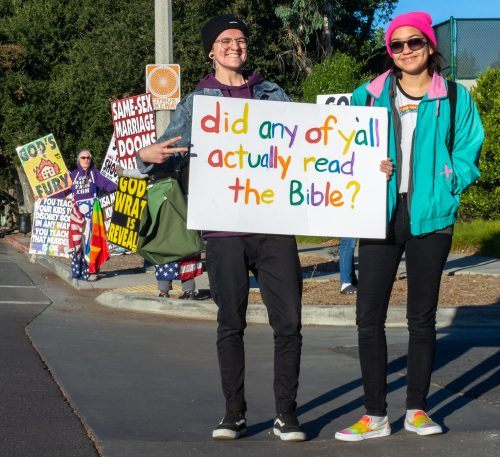 Chaffey College student Brianna Bafford and University of La Verne freshman criminology major Elaine Molina protest a demonstration by the Westboro Baptist Church outside Pomona College Monday. Students from the Claremont Colleges, Chaffey College and the University of La Verne, along with Claremont residents, gathered on either side of the protesters with signs of their own supporting gay rights, gay marriage and queer education – among the human rights the Westboro Baptist Church stands against. They shared donuts and danced to the Village People’s “YMCA” as the protestors left. / photo by Natasha Brennan

More than 200 members of the surrounding Claremont and La Verne communities gathered to protest a picket by the Westboro Baptist Church, an organization known for protesting public events, even funerals, with inflammatory anti-LGBT signs and rhetoric.

The picket, which was announced in a press release on the church’s website, began at 6:30 a.m. on Monday at Claremont High School and moved to Pomona College at around 7:45 a.m. that same day.

A course titled Queering Childhood to be offered at Pomona College in spring 2019 drew the church’s attention.

“This interdisciplinary course examines the figure of the child and how this figuration is used by politics, law, and medicine to justify continued cultural investment in reproductive heteronormativity and productive ablebodiedness,” reads the Pomona College course catalog.

The church’s press release also cited the school’s diversity of languages and national origins as a reason to protest at these locations, since it would allow them to spread their messages around the world.

Sam Phelps-Roper, grandson of Westboro Baptist Church founder Fred Phelps, said he believes many of the California crises, such as the wildfires and recent mass shooting in Thousand Oaks, are happening because of a lack of adherence to the church’s interpretation of the Bible.

“Bullets are flying and the fires are raging,” Phelps-Roper said. “This is the work of God. He is doing this. He is going to keep doing this and the only hope you have to repent. It’s a vile thing. But it is the product.”

The church members brought signs to both locations that read “God Sent The Shooter,” covered in blood-red splatter and child-sized handprints, along with other signs reading “Tranny Sin Dooms Nations” and “Repent or Perish.”

Counter assembling community members carried posters with pro-LGBT messages such as “Love triumphs” and “Did any of y’all actually read the bible” written in rainbow colors.

“God’s got people in this nation in terror all around him,” Phelps-Roper said. “There’s nowhere to go for refuge because they think they can make refuge with their hands and their laws and their military might and they can’t — there’s no refuge to be found.”

Rachel Hockenbarger, Fred Phelps’ daughter, said her church is doing more than anyone for individuals who identify as LGBT.

“We are the only people in this world who love so-called gay people because we only ones who will tell them the truth,” Hockenbarger said.

The church brought a bluetooth speaker to the demonstration and played songs such as “Shooters Keep Comin’ Around,” a parody of Bastille’s “Pompeii.”

The song includes the following lyrics: “And the shooters keep comin’ around, In the cities that you love, Much blood flowing in the streets, Bringing God’s wrath from above.”

The church was met at both location by protestors who disagreed with the anti-homosexual messages.

“Not in our town,” said Claremont resident Rose Ash, who met the church at the corner near Pomona College. “Anywhere or anytime you will be confronted by people who oppose hate and who will stand up and do everything in their power to ensure that love triumphs over your hate.”

Students and community members met at 6 a.m. in the school’s quad area to paint signs in preparation for their own “Love-Fest” to run counter to the church’s protest planned for 6:20 a.m.

Pomona College stationed campus security near the location of the protestors. The safety officers were given instructions to escort them off private campus property should they make their way onto the campus grounds.

Rachel Lau, a freshman at Pomona College, co-organized an assembly to combat the anti-LGBT messages that were being spread near the campus along with freshman classmates Rachel Howard and Rowan Macy.

“We wanted to not allow this hatred to be on campus and show people on campus who might feel scared by these words that there’s a lot of people here who care about them,” Lau said. “I think in this political culture, now is not the time for a silent ally-ship. Being a silent ally is not being an ally.”

“They are also attacking Pomona’s diversity in terms of sexual orientation, gender identity and backgrounds like where you’re from or who your family is or what life experiences you’ve had,” Macy said.

“Our diversity is what makes us a great place to be,” Howard said. “That we have people from all different backgrounds and all different life experiences. If we’re proud to be able to share these each other then that just makes our communities stronger.”

Elaine Molina, a University of La Verne freshman criminology major who identifies as LGBT, went to both locations with rainbow-patterned apparel and hand-made signs with messages of love to protest the church’s anti-LGBT sentiment.

“If we’re supposed to follow Jesus as an example according to their beliefs then why aren’t they following his examples of love, examples of compassion and his examples of just showing the same respect to everyone,” said Molina, who no longer adheres to Christian beliefs after finding them hateful.

The church believes being homosexual or engaging in homosexual behavior is a choice popularized by society and will result in God’s destruction of humanity.

“You teach children that not only should they fornicate their brains out and that they should have same sex marriage and all those things…now you’ve upped the ante,” Phelps-Roper said.

“When someone tells me that this is my choice I tend to start looking back on all the memories that led up to me being this way. Even then as a child I didn’t know what this was,” said Briana Bafford, a sophomore at Chaffey College who also protested both locations.

“I didn’t know what any of this meant…so for you to tell me that it was a choice because I just decided supposedly on this thing. It just doesn’t add up to me. I had gay tendencies when I was a kid,” Bafford said.

Christian Shepherd can be reached at christian.shepherd@laverne.edu or on Twitter @cmshepherdnews.