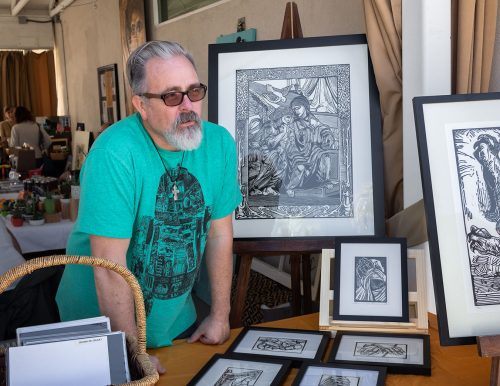 Community members began their annual holiday shopping season as they navigated their way through various booths at a craft fair in Pomona.

About 30 men, women and children prepared for the holiday season at the sixth annual Handmade Craft Fair in Pomona Saturday afternoon.

Community members had the opportunity to shop, eat and enjoy conversing with family, friends and fellow booth owners.

The fair took place at St. Peter the Apostle Antiochian Orthodox Church, which gave some booth owners the opportunity to attract the community with religious messages and prayers on their products and crafts.

“I realize that there’s a lack of Orthodox crafts, especially baptismal robes,” Granite said. “It’s really hard to find someone who can make traditional Orthodox baptismal robes and I have kids so I wanted an alternative for them to play with and have a traditional feeling when using these crafts.”

The fair allowed other owners to share their products or items that may have not necessarily been hand crafted, but still came from the individual’s idea, still executed by hand.

Kellee Nelson, event coordinator and booth owner, sold mini succulents, a homemade chili powder and a sleep kit including lavender mist and a sleep mask at her booth.

A few other booths offered jewelry, handbags and garden accessories.

A couple of the more popular booths sold food, pastries and personal handmade cards and letters.

The most visited booth was a business called Emilia’s Post, where owner Kelsey Lawson sold cards, letters and posters with biblical quotes and Orthodox figures.

“I do water color art and calligraphy. I take different quotes and passages from the scripture to create beauty in people’s homes,” Lawson said. “I needed an art outlet and it gave me a lot of joy.”

The church held a raffle every 30 minutes in which one woman won a wooden plaque that highlighted the importance of family, while giving it to her daughter to hold.

Christopher Gonzales-Aden, local artist, came out to enjoy his friends in the community and to showcase his linoleum art that symbolizes biblical events during the holidays.

“Almost all of the art have biblical narratives to them,” Gonzales-Aden said. “You have to want to make the art, but as you get older and think about it, I realize that in the way God created me, I am experiencing a part of him in creating them.”