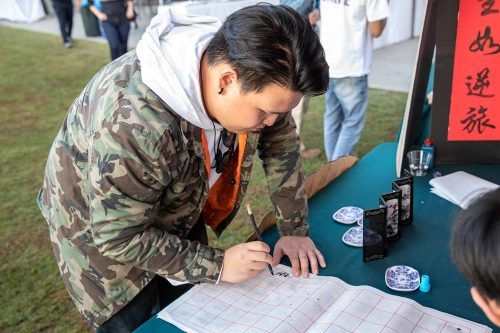 Senior psychology major Xingda Zhu writes Chinese characters at the Chinese booth at the International Education Festival Nov. 15. The festival, hosted by the Office of International Services and Engagement, encouraged students to learn about different cultures. / photo by Jaren Cyrus

Students learned about customs from around the world and educated one another on different traditions and cultural practices at the International Educational Festival.

Presented by the Office of International Services and Engagement, the festival took place on the Citrus Lawn Nov. 15.

Booths filled the lawn, each representing a different country, offering activities and food.

Students were presented with fake passports so they could get a stamp from each group, and turn in the passport, in hopes of winning a prize from a raffle.

The Kenya booth was run by sophomore English and Spanish major Dyamond Gray.

“I’m part of BSU (Black Student Union) and the Language and Culture Club so I thought this is the perfect opportunity for me to showcase an underrepresented country or culture,” Gray said. “To me, that was Kenya.”

Dyamond said that having everyone exposed to different cultures helps decrease prejudice in the world.

“The more we know about other people around us, the easier it is for us to understand them, to be less discriminative of them,” Gray said. “It is to be more inclusive and provide unity.”

Lorali Mossaver-Rahmani, senior anthropology major, hosted the Iran booth not only because she is half Iranian, but because she wanted to debunk the negative representations of Iran in the media.

“Before the revolution, the flag had a lion and a sword on it representing the Persian Dynasty’s Persepolis, the ancient Zoroastrian religion still practiced today,” Mossaver-Rahmani said.

Mossaver-Rahmani said that after the revolution, when it became an Islamic state, the flag had an Arabic symbol for Allah in the middle.

“There are a lot of Iranian people in Los Angeles, and you can see their political stance based on what flag they’re flying,” Mossaver-Rahmani said.

Mossaver-Rahmani said the mission of the Language and Culture Club is to educate people on language and culture, and the International Educational Festival allows them to do just that.

The English Language Services mentor program also had a booth at the festival.

“As the students apply and sign up, we have our International students who are here learning English before they matriculate to the University,” said ELS mentor program director Carrie Woods.

The ELS mentor program pairs students up by common interests so they can meet.

The program helps international students become more integrated in the University campus, making their transition to a new environment easier.

“We want the students to feel a part of the University at large and not just the international community,” Woods said.

“I’m from an Asian community,” Kim said. “Coming to La Verne was a culture shock because I wasn’t really familiar with a different culture.”

The International Student Organization brings in American and international students to build a bridge between the two.

“I like how they added the passport idea where the students can learn more about the cultures,” Kim said.