By Ariel Torres, David Gonzalez on November 9, 2018 in LV Life 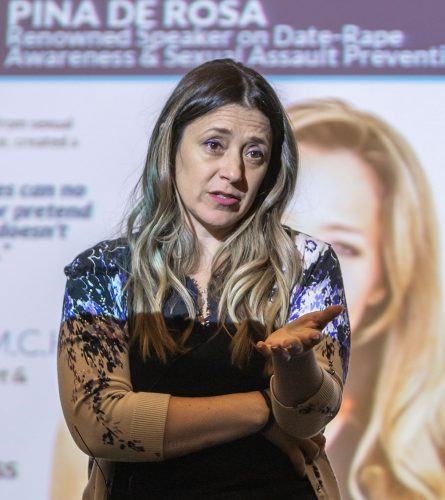 Pina De Rosa explains her “Treats for Pups” passion project, and she discusses overcoming obstacles Thursday in the Campus Center Ballroom. The event was put on by the La Verne chapter of Her Campus. “Treats” creates packages of pet food, blankets, and supplies for stray dogs. Her Campus is an online publication by and for college women with 300 international chapters. / photo by Ariel Torres

All 30 people at the event were standing.

The American Psychology Association found that 63 percent of Americans found the future of the U.S. to be the most common cause of stress in its 2017 Stress in America survey.

Other common causes of stress included money, at 62 percent, and work, at 61 percent.

Stress levels have remained consistent over the years, but now people are more likely to report symptoms of stress, according to the study.

“I was part of the culture that glorifies busy and I was just valuing being busy, busy, busy and I burned out,” De Rosa said.

De Rosa said her busy life led to feelings of overwhelm, causing her to coin the term SKS Factor.

“Goals are useless unless they challenge us and really inspire you to grow,” De Rosa said. “This is something that will allow us to move in that direction.”

De Rosa said dealing with feelings of overwhelm involves recognizing the problem at hand, reaching out for support, and having the will to do something different.

If one person does not finish their goal for the night, the other cannot do theirs the next day.

“The SKS allowed me to lose the first 20 pounds and to rebalance my life,” De Rosa said. “You may not have weight to lose, but apply it to the area of your life that is in constant pain, overwhelm and challenge.”

Mulan Novilla, president of Her Campus and senior communications major, said the main goal of the event was to give people an action plan in the form of De Rosa’s SKS Factor.

“Even though we want to motivate ourselves we actually don’t know where to start,” Novilla said.

Arianna Govea, Her Campus member and freshman psychology major, said she enjoyed learning about how to overcome certain struggles and hopes to apply what she learned to her life.

“I hope to every day focus on my goals and not avoid any challenges I want to overcome and just face it head on,” Govea said.

Alyssa Noriega, senior business administration major said from this she learned to take more time for self-care and that it is okay to say no sometimes.

“I know sometimes the hardest thing to say is ‘no’, but it gets easier as I do it,” Noriega said.

“It makes sense because sometimes you do things more for other people a lot more than for yourself,” Noriega said.

De Rosa said it was important to “sharpen the axe” of our minds by taking breaks from work.

“The successful people are the people who do the stuff that the unsuccessful people don’t want to do,” De Rosa said. “Instead of wishing for something to be easier, show up like you did tonight.”