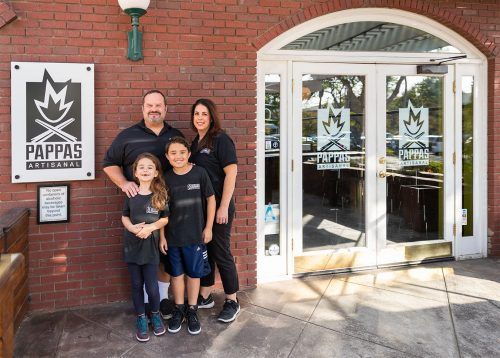 After a change of ownership in July, new hours, and a new menu helmed by Executive Chef Arthur Siler III, Pappas Artisanal is ready to dominate D Street.

For Khevin DeVaughn, Pappas’ new owner, owning a restaurant has always been a dream. He has worked in education for the last 30 years, while watching his wife and in-laws run a number of restaurants across Southern California. When the craft beer boom began around 2014, he knew he wanted to break into the industry.

DeVaughn, who is assistant principal of Alhambra High School, has a Monday through Friday work week packed with daily emails, student discipline and crises, and supervising sports games.

When his day as a principal eventually ends, DeVaughn takes his son to football practice and then heads to Pappas. Where hours earlier he was Mr. DeVaughn leading a high school, becomes Khevin, a restaurateur, who seems more like the mayor of a small town. Heading to Pappas after leaving his day job does not feel like going to work, DeVaughn, 50, said.

“When I get here and I get to talk to people, I get to sample a beer or some food and see people that are happy,” DeVaughn said. “I feel good.

“I’ve dedicated 30 years to working for the government, so I wanted to try my hand at entrepreneurship before I got to be too old,” he said.

He found the hurdles involved with starting from scratch were too much and resolved that opening an entirely new restaurant might not be in the cards.

“Starting from scratch turned out to be a big challenge,” DeVaughn said. “Getting financing, learning not just the restaurant industry but the construction industry, I didn’t want to do that.”

So he began looking to buy an existing restaurant. As a Glendora resident who loves the small-town vibe of the Foothill communities, he knew he wanted a restaurant in one of them. DeVaughn briefly entertained the idea of a franchise, but decided that was not for him.

He talked about his idea with a friend in the restaurant industry who told him about a place in La Verne that fit the style he was looking for – Pappas Artisanal.

He came to La Verne to check out Pappas before it was on the market.

“Whatever I did had to have authenticity. I saw this place had it,” DeVaughn said.

Three months after his initial visit, Pappas was listed for sale. He met with the previous owners Matt Fong and Travis Flood and began negotiations to purchase Pappas.

DeVaughn took over ownership July 23. Luckily for him, Fong and Flood stayed around to lend their expertise during the transition.

“Matt was really there as a good partner during the transition,” DeVaughn said. “He spoon fed us a lot of knowledge.”

Among the most noteworthy updates to Pappas is new hours. Previously closed Mondays and Tuesdays, it will now be open all week for lunch and dinner, and brunch and dinner on Saturday and Sunday.

“We liked what was here already, but we wanted to add a few thoughts, a few of our own ideas and concepts to the mix,” DeVaughn said.

DeVaughn said he hopes to bring more University of La Verne students through the door. He’d also like to connect with the La Verne art department to feature rotating displays of student artwork on the walls of Pappas, giving students a venue off campus to showcase their work.

With an already substantial craft beer menu, DeVaughn also plans to add a larger TV and feature Monday Night Football, for which he hopes to pair each game with a regional dish based on the teams playing: Chicago dogs when the Bears play, clam chowder for the New England Patriots, or cheesesteaks for the Philadelphia Eagles, he said.

DeVaughn hopes his restaurant will become his “legacy project,” someday having his children take over operations.

In the near future, he hopes to see Pappas packed with regulars.

“It’s a community,” he said. “The families, the students, people in the area, they want to come and enjoy themselves.”

DeVaughn and his wife Dimitria, who runs the day-to-day operations of Pappas, hopes the restaurant will attract families with their new family-friendly updates.

Executive chef Siler has added a new kids’ menu including chicken strips, a grilled cheese made with cheddar and aioli, and macaroni and cheese, all for $7 or less. Pappas will also feature a new menu that maintains the quality Pappas has been known for while making it more accessible for families and college students.

“I wanted the menu to be diverse, something for families, for young people, for older folks,” Siler said. “I wanted it to be the best America has to offer.”

Siler has a passion for “elevated homemade,” crafting high quality dishes with exciting and balanced flavors.

The mac and cheese, served in a skillet with mild cheddar, cream, butter and garlic with perfectly gooey pasta beneath baked bread crumbs. It’s also available with chunks of pork belly, which is slow cooked, braised overnight, then crisped off on the flat top.

The Pappas cubano sandwich comes with a layer of ham, a subtle yellow mustard made completely in-house, garlic aioli, swiss cheese and pickles.

Pappa’s renowned Sunday brunch including bottomless mimosas made with aguas frescas will remain; the only changes to Sunday brunch will be additions to the menu. The most noteworthy is the shrimp and grits plate, inspired by Siler’s love of all things Cajun.

The Americana options are getting a boost with the additions of three new burgers.

The Grecian is a beef patty topped with shaved lamb, feta, tzatziki, cucumbers and a black olive tapenade. It is a culinary love letter to co-owner and matriarch Dimitria’s Greek heritage, and her husband’s love of Americana classics.

The jalapeño burger has candied and fried jalapeños with a chipotle aioli. To those who are not adventurous enough for either of those, the more traditional D Street burger will remain on the menu.

The dessert menu of the pre-DeVaughn era Pappas only had a few lackluster options that failed to hold the high standard set by the rest of the menu. Siler is elevating the dessert options with two notable additions, a poached pear and a bread pudding that Siler says can convert the most vehement bread pudding detractors. The poached pear is a culinary and visual masterpiece served in a red wine reduction with blistered blueberries and an apple cinnamon crumb, along with vanilla ice cream.

The DeVaughns were able to take a bird’s eye view of Pappas history and its place in the La Verne dining scene. With their understanding of dining being an experience and Siler creating culinary art in the kitchen, there is no doubt that in 20 years DeVaughn’s children will be running the place as he hopes.