By Claudia Ceja, Maydeen Merino on November 2, 2018 in Sports, Volleyball 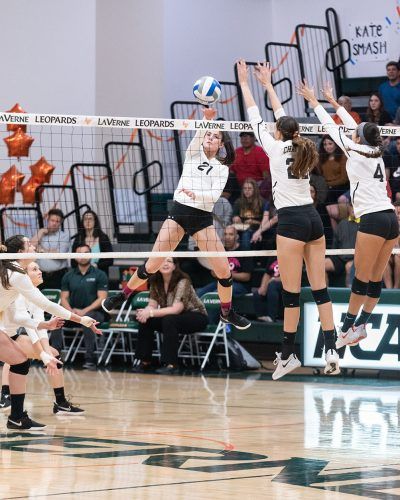 Freshman outside hitter Haley Celaya spikes a point for La Verne during the first set against Chapman on Friday in Frantz Athletic Court. The Leopards took the win from Chapman, 3-1. La Verne started the SCIAC postseason tournament Thursday at Claremont-Mudd-Scripps. / photo by Claudia Ceja

It was an electrifying senior night for the La Verne volleyball team as it beat Chapman, 3-1, Friday at Frantz Athletic Court.

The Leopards had a close first game with the Panthers but was able to win, 26-24.

They fell short in the second game, and the Panthers were able to regroup and even up the match 1-1.

“In the second game we got sidetracked and stopped digging and stopped going for balls,” senior outside hitter Kelsie Sievers said.

Yet, the Leopards came back in the next two sets, beginning each set with high intensity to dominate them both.

“We definitely had a lot of ups and downs,” senior middle blocker Katelyn Winiecki said. “It just came to that second game where we thought we had it, but we definitely focused up.”

The Leopards and Panthers had tremendous rallies throughout the entire match.

“We knew it was going to be a hard game going in,” Sanchez said. “They are second in conference and we are fighting to stay in the top four, so we knew had to be fighting hard, but we came in with a lot of energy ready to win.”

Friday’s win moved the Leopards into a tie for third place with Chapman, making their outlook for the playoffs more realistic.

“It was a great way to end my career as a Leopard,” senior defensive specialist Teagan Griffiths said. “We really came together as a team physically and mentally, and that’s the best game we have played as a team.”

This was a must-win for the Leopards to secure their spot in Southern California Intercollegiate Athletic Conference postseason tournament.

“I am really proud of my girls,” head coach Jenna Panatier said. “These women stayed with our plan. They kept their confidence high even after struggling in game two and they came out and took care of business. It is not an easy thing to win a game you know you have to win in order to have an opportunity in the conference championships and instead folding, they rose.”

The Leopards fell to the Pomona-Pitzer Sagehens on Saturday but still clinched a spot in the SCIAC postseason tournament for the fifth year in a row.

The team’s conference record of 10-6 earned it the fourth seed in playoffs.

The Leopards faced No. 1 seeded Claremont-Mudd-Scripps in the SCIAC semifinals Thursday night at Roberts Pavilion. Results were not available at press time.