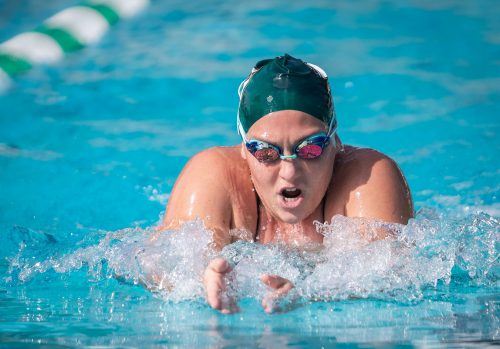 Senior biology major Kirsten Knoblach swims the women’s 100-yard breaststroke Nov. 17 at the La Verne Aquatic Center. She won the event with a time of 1:19:49. The women’s team finished the meet against with 148 points and the men put up 124 points for men, good enough for a sweep of the Poets. La Verne’s next home meet will be at 10:30 a.m. Jan. 12 against Occidental. / photo by Ariel Torres

Coming off of a difficult loss to Redlands in their season opener, the men’s and women’s swim teams bounced back in their home opener against Whittier at the La Verne Aquatic Center Nov. 17.

“I think we did great,” senior C.J. Woodward said. “We got a lot of points that we weren’t expecting to get in a lot of close races, so we were all pushing, really trying to get our hand on the wall first.”

The women started off strong by winning the 200-medley relay, with senior captain Kayla Yip and senior Rachel Fox securing the win.

Fox would go on to compete in many of the long-distance events throughout the day, placing second in the 1,000 freestyle and first in the 500 freestyle.

Fox would also pick up a win in the 100 breastroke. Yip would go on to win both of her butterfly races (100 and 200 yards) and placed second in the 100 freestyle.

Freshman Alondra Camacho was another standout performer for the women’s team.

She swam the first leg of the medley relay and would win both of her backstroke events (100 and 200 yards) and placed second in the 200 IM.

“It’s been a little difficult managing the college workload with practice, but it’s been going well,” Camacho said.

Senior Brandon Pon handled the distance events for the men, winning both the 500 – with freshman Trevor Ichiki placing second – and the 1,000 freestyle.

“Swimming as a senior in high school to a freshman in college has definitely been a new experience for me,” Ichiki said.

Woodward won the 100 butterfly for the men and placed second in the 100 freestyle – just out-touching senior teammate Kristofer Grigorian.

Woodward, who previously competed in backstroke, transitioned to butterfly this year, with sophomore Lorenzo DeLeon taking his place in backstroke.

“It’s been kind of a weird transition for me, from backstroke to fly, but it’s been fun,” Woodward said.

DeLeon just barely got the win in the 100 backstroke, finishing 56.45 – out-touching his opponent by .17 seconds, and would also win the 200 backstroke, with Woodward finishing in third at 1:00.33.

“First places are weighed a lot more heavily, so we were just trying to get the wins wherever we could, we were ready to race. We knew it was going to be a close meet,” senior Kris Grigorian said.

Heading into the last two events, the men’s and women’s 400 freestyle relay, the women’s team had secured their win via their strong performances throughout the day, but the men’s team was still trailing 113-117.

That meant it all came down to the last relay – whoever won the race would win the meet.

“I told everyone, ‘Just swim as hard and as fast as you can no matter how far ahead or behind we are,’” Grigorian said. “Sometimes even if you’re ahead in a race, you never know who’s coming next and if you slack off they’ll beat you.”

Pon swam the first leg of the relay and managed to stay even with Whittier’s sprinters.

Grigorian took the second leg, but was unable to pull away and mostly stayed neck-and-neck with Whittier’s Devin Gaude.

DeLeon, who had a standout day thus far, entered as the third leg and managed to gain a five second lead over Whittier’s Ruben Gallegos.

With the lead, all Woodward had to do as the anchor leg was protect his lead, and he did just that, out-touching Whittier’s Yehya Nasser by 17 seconds.

“We knew we had to win that relay to have any chance of winning,” Woodward said.

The Leopards will compete in the Collegiate Winter Invitational Saturday and Sunday, starting at 10 a.m. both days, at the South Gate Swim Stadium.

“I think if we keep the team’s energy up we can really have a solid Winter Invite,” Woodward said.