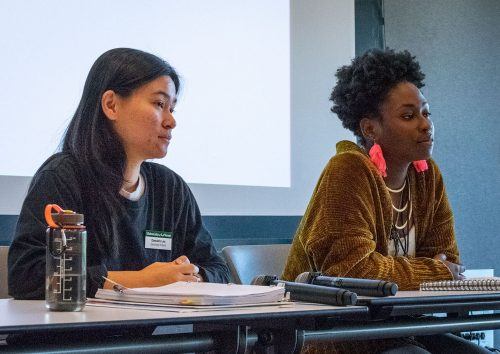 Damairis Lao, senior art and art history major, and alumna Jedaun Carter share stories of their journey to sexuality, spirituality and religious faith at the second Queer Education 101 session Nov. 15 in the Campus Center Ballroom. The session, led by University Chaplin Zandra Wagoner, shed light on the disparity between the LGBT community and lack of religious acceptance. / photo by Layla Abbas

The second session of Queer Education 101, developed by a team of faculty, uncovered challenges the LGBT community experience with balancing their sexuality, spirituality and religious faith.

Zandra Wagoner, University chaplin, led a student and alumni panel as they shared personal journeys with religion and spirituality Nov. 15 in the Campus Center Ballroom.

Wagoner, who identifies as lesbian, said people who are LGBT tend to stray away from their religion because of the negative perceptions geared toward their community.

“I see this as an actual loss for the LGBT community,” Wagoner said. “It is not that everyone needs to be religious, but these are real places of social uplift and spiritual development. (This) matters to someone, but is often times cut off for individuals in the LGBT spectrum.”

In a 2014 study by the Pew Research Center, Evangelical Protestants, Muslims, Mormons, Historically Black Protestants and Orthodox Protestants were not fully supportive of homosexuality.

Wagoner acknowledged the improvement from the last study in 2007, but said this is still a challenging concept for people of religious backgrounds to support and accept.

“Religion is a resource taken away from the LGBT community simply because the community they had did not make space for them,” Wagoner said.

Carter, who identifies as spiritual but not religious, grew up in a traditional baptist home.

“I was involved in the church Monday through Sunday,” Carter said. “I was not allowed to do anything after school unless it was church, read anything other than biblical texts and watch anything unless it was related to God.”

Carter said she was always told homosexuality was considered a sin in her religion.

“I knew deep down I was homosexual,” Carter said. “I knew my parents views and my views were conflicted. So whenever I approached my parents and asked them, ‘Where in the bible does it say being homosexual is a sin?’ my dad could never give me a direct answer.”

Carter said after parting ways with Christianity she is now at peace with her spirituality and sexuality.

“I found value in believing in a higher power and knowing there is someone I can turn to,” Carter said. “Some kind of guide that does not judge me.”

Lao, who identifies as queer, converted to Christianity two years ago after being culturally raised Buddhist.

Lao said she did not grow up in a religion that was homophobic, but started to hear the rejection others had toward the LGBT community in school.

“It was harmful to me to be closeted in such a way where you are hearing the pastors say homosexuality is the equivalent to stealing and murder,” Lao said. “I did not like it, and I did not believe it.”

Lao said she has not faced any discrimination because of her sexuality, but has had uncomfortable experiences.

“I felt closeted again when I first began college,” Lao said. “I say I first came out because coming out is always a continuous process. So when I entered college I am around new people, it is a different closet now.”

Urich, who participated via pre-recorded video clips, said he is culturally Jewish although many prayers he does are inspired by Islam.

“I have never been kicked out of a religious faith or been abused on the basis of religion,” Urich said. “I was kicked out of my grandma’s house but that was just her being an Evangelical Christian.”

Urich said he has the privilege of being perceived as a cisgender male, one whose gender identity matches the sex assigned at birth but is a transexual male.

“I use this term to speak to my unique journey,” Urich said. “I was born anatomically female and have undergone medical intervention hormonally and surgically to align my primary and secondary characteristics with my identity as a male sex and male gender.”

Urich said one of the coping mechanisms he used while at ULV was reaching out to people he knew would not predict his next word but instead listen.

“I confided in (Wagoner) and other staff,” Urich said. “It allowed me to have a space where I felt respected, safe and honored to voice some of these things I was navigating at the time.”

Kim Dieu, assistant professor of school psychology, said there is a difference between someone who is religious, which is a man-made concept, and someone who is spiritual.

“Religion has been used to oppress people and has marginalized individuals,” Dieu said. “Religion has changed, but there are still institutions that are very resistant to embrace cultures that have (new) identities that.”

Lao said she has found support at ULV through the Center of Multicultural Services, professors who identify as bisexual, queer positive friends and Wagoner.

“I think 2017 was our awakening to build community for LGBT students in a very public way,” Lao said. “It is very important to have these events because it shows, ‘You are fine here, you are cool here, and we support you.’”