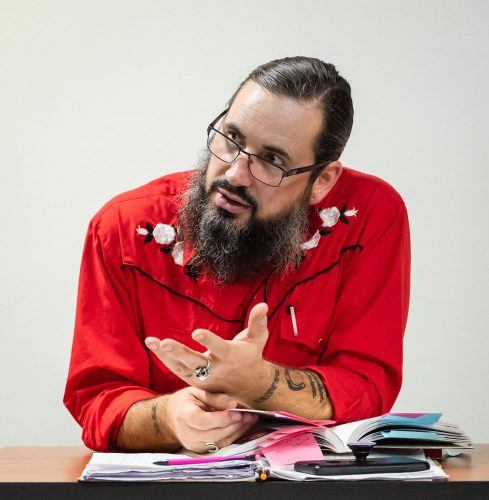 Adjunct Professor of Photography Andrew Thompson speaks to his class, The Magic Box Revolutions: A Social History of Photography, about post-modernism. Nov. 8. / photo by Natasha Brennan

Before winding up at the University of La Verne as an adjunct professor of photography, Andrew Thompson performed in front of crowds as a wrestler donning different stage-names and costumes and created professional pillow-fight tournaments in New York.

Although he has dabbled in other creative endeavors and professions, his passion for photography has been a constant since a high school injury.

“I found photography on my own when I broke my leg and my friends were still skateboarding and I wanted to tag along,” Thompson said. “So, I extended my crutches and pushed along and took pictures when we got to the spot.”

Still in high school, he would take photos at a race track with a photographer who brought him under his wing. One Thompson’s photos made the cover of a BMX magazine.

Shortly after, he found work at a portrait studio and began taking classes at Pasadena City College. He went on to pursue his bachelor’s degree in fine arts at the Academy of Arts in San Francisco.

While at the Academy of Arts, a chance encounter at a party with the owner of a wrestling troupe called Incredibly Strange Wrestling led to him getting a job with the group handling cleaning, taking out the trash, and other menial tasks.

Through this, he quickly began to establish a friendship with the wrestlers.

“I was introduced to the gang of wrestlers and they thought I was cool enough to be a part of the gang and I just jumped into it,” Thompson said.

The all came from diverse backgrounds, there were corrections officers, stoners, pizza delivery men, bartenders, bouncers and bus drivers, all moonlighting as professional wrestlers.

Incredibly Strange Wrestling earned its namesake through its twist on wrestling characters and shows.

“There were food fights during the matches, corn tortillas were passed out to the audience to throw,” Thompson said.

One of Thompson’s characters was Dancin’ Joey of 69 Degrees, a teen idol who played in a Scientologist boy band.

With Incredibly Strange Wrestling, Thompson was able to travel around the United States with Vans Warped Tour, a summer rock festival.

“It was the coolest thing I have ever done in my life, I know a lot of people who are in bands that travel the world but none of them were wrestlers or got paid to be one,” Thompson said.

Thompson received his bachelor’s in fine arts at the Academy of Arts in San Francisco.

After 10 years in San Francisco, Thompson traveled to New York City the week after 9/11.

His mother Mary Jane Thompson drove up eight hours to see him off the weekend before he left.

The eight hour drive was worth it to his mother when she was able to have dinner with Thompson and to give him one last “mom-hug” before he left to New York.

“Andrew always made my life interesting from the time he was young,” Mary Jane Thompson said. “I have always had a philosophy in supporting my children in whatever they do.”

In New York, Thompson furthered his photography career, displaying his artwork in exhibitions and getting more critical in his practice.

His pension for unique ventures took on a new form in New York as Thompson created Punk Rock Pillow Fights – a punk-themed pillow fight tournament with both individual and tag team matches.

Thompson left New York in 2011 to be closer to his mother, who lives in Riverside.

When he returned to California he began his master’s of fine arts in studio art at Cal State San Bernardino.

Dancin’ Joey now goes by Professor Thompson and teaches Photo 305, The Magic Box Revolutions: A Social History of Photography at La Verne. He also continues his love for the arts as a curator at his own art gallery in San Bernardino called the Little Artwork Gallery.

The gallery showcases artists from San Bernardino County and around the world. One of his former students, Eric Servin, helps set up the gallery with Thompson. The gallery puts on exhibits for the local community at least once a month. The gallery held its first show in August.

“The idea behind the gallery is space for shows, me and him choosing people we want to exhibit,” Servin said.

As a professor Thompson is passionate about teaching and tries to get his students involved in his classes.

“He is able to connect a lot of concepts to photography and he is really passionate about teaching his students,” sophomore and photography major Mya-lin Lewis said.

Thompson said teaching The Magic Box Revolutions is a departure for him as he usually teaches digital processing classes.

Thompson splits his class into two parts, the past and present. Everything he lectures about he tries to find a way to connect to real life and relate to the students artistic passions.

“I ask students what are you interested in, what makes you so distracted, or so in love in whatever that is that you forget everything else around you, is what you should be photographing,” Thompson said.

Thompson does not put genre restrictions on his photography and believes in the fluidity of his interests, which means there is no one answer as to what subjects he photographs.

“What can’t be taught but is constantly fluid is your creativity, your interest, your love, your drive so with that I take pictures of whatever I want, “Thompson said. “I like to call this the Andrew experience, because whether you’re at Chaffey, ex-military interested in photography, any grad students or to a guy who doesn’t know anything about photography, Andrew doesn’t talk any different.”