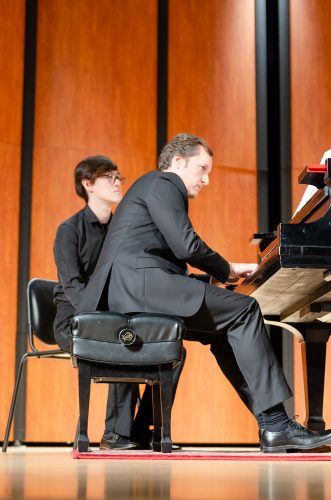 Most of the pieces Liebich performed were composed by French composer Claude Debussy, who wrote poetry along with his compositions.

Before the performance, Liebich explained to an audience of about 30 that there was no available translation of the French lyrics due to contradictions within Debussy’s poetry.

The audience was consistent throughout, assuring the performers that their undivided attention was on them the whole night.

Pisturino filled the auditorium with high notes while Russell created a mood of mystery with his instrument.

Comments were murmured throughout the room about Pistorino’s voice and the way it persuaded the audience to enjoy classical music due to how beautiful it was, Reed Gratz, professor of music, said.

“The performers were phenomenal,” Gratz said. “The piano playing by Rafael is what I have come to expect from him, he is an astounding player and he is our artist in residence on the faculty which is quite an honor.”

Audience members seemed to have appreciated the two other artists who accompanied Liebich on stage, having commented on how well the three were together.

“It was entertaining because he was so talented, so were the singer and violinist,” Victoria Sanchez, sophomore business administration major, said. “I didn’t know what to expect but it was definitely entertaining for what it was.”

“Watching them perform you could see the passion that they bring to the music was super,” Gratz said.

“The performance was more than I expected, the music told a story with just the instruments full of intense moments, yet relieving them with soft supportive notes,” said Claire Arredondo, Pomona resident.

Liebich has been playing the piano for 33 years, starting in South Brazil where he grew up.

He eventually moved to the United States 11 years ago to attend the USC Thornton School of Music for his doctoral degree.

“You can be a teacher, a performer, you can work for dance companies, you can perform for ensembles… I had the chance to work on soundtracks because Hollywood is down the street, so to speak.”

In Brazil there is not as much space for music, it is a little more complicated to succeed in the field due to the lack of schools that offer education in the profession, Liebich said.

There are less venues as well, but if an opportunity does arise in Brazil, it is very rewarding, he said.

The next Sundays at the Morgan concert will feature the University Chorale and Chamber Singers performing their annual Choral Holiday Spectacular at 6 p.m. Dec. 9.