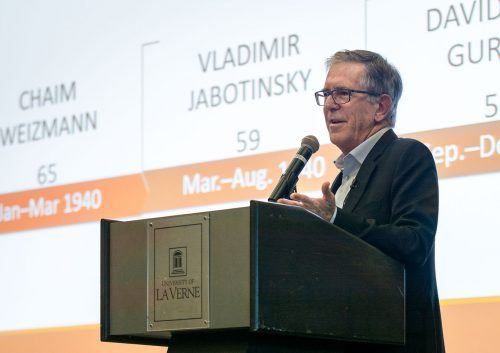 Author Rick Richman discusses his book “Racing Against History” at the Kristallnacht Remembrance lecture hosted by the Jewish Federation Saturday. Richman told the audience about three Zionist leaders that fought to have a Jewish army built before the Nazi occupation could act. In addition to being a published author, Richmond also practices law. / photo by Veronyca Norcia

Lawyer Rick Richman discussed his book, “Racing Against History: The 1940 Campaign for a Jewish Army to Fight Hitler” Sunday in the Campus Center Ballroom.

The men came separately to the United States during World War II in hopes of gaining enough support to build a unified Jewish army to fight against the Nazis.

Despite having similar goals the men were divided by their differing views on Zionism.

The men held rallies, reached out to politicians and brought together American Jews in hopes of building a unified front and fighting against their oppressors.

“This is a story about what individuals can do, and heroism that we ought to remember and pass on as part of our heritage” Richman said.

Richman was the featured speaker of the University’s annual Kristallnacht Remembrance lecture.

The lecture is held in remembrance of the violent acts that occurred that night. It is a joint partnership between ULV and the Jewish Federation of the Greater San Gabriel and Pomona Valleys as part of the Jewish Book Festival.

Rose Ash, one of the organizers of the Book Festival said La Verne is the only school that hosts the events, as most are usually held at synagogues and restaurants.

Richman talked about the anti-Semitism in America at the time of World War II perpetuated by public figures like Henry Ford and others who spoke openly about their disdain for Jewish people.

“The anti-Semitism was public and backed up by social anti-Semitism too,” Richman said. “There was restrictions on Jewish employment, restrictive covenants in housing so you could have in your deed that Jews couldn’t live in your neighborhood.”

Although none of the men were able to form the Jewish battalions they had hoped, Richman did not think their efforts were wasted.

“The story of what they did is hopeful, it’s not a tragic story” said Richman. “It’s a story about how even at that point in time, a year after Kristallnacht, after Poland was wiped out, after everything here’s what the Jews were doing.”

Richman noted that an entirely Jewish brigade was eventually formed in 1944 by the British Army. More than 5,000 Jewish troops fought against Nazi reign in northern Italy.

Richman said that after the war the American Jewish community suffered from survivors guilt and were not willing or ready to tell their stories. Causing Jewish stories like “Racing Against History” to be lost in the span of a lifetime.

“We know about Kristallnacht. Why didn’t we know about heroic efforts to form a Jewish military force to join the fight when no one else wanted to?” Richman asked.

La Verne resident Robert Richter was 8 years old and living in Hanover, Germany, when Kristallnacht occurred, he disagrees with the notoriety the night of broken glass holds.

“That was nothing. We had already suffered so long. For years I was chased in the street, ‘Jew, Jew, Jew!’” Richter said.

Richter also drew parallels by what he witnessed before the rise of the Nazi party and what he sees occurring in America presently.

The lecture was held just two weeks after 11 people were killed and six more were injured when a gunman opened fire at a Pittsburgh synagogue.

“To combat that which is evil we must strive to be informed,” said University of La Verne alumnus Bernard Karmatz.

“What’s interesting about things like Pittsburgh that just happened is the outpouring of support for the Jewish community across the board and in the public,” Richman said.