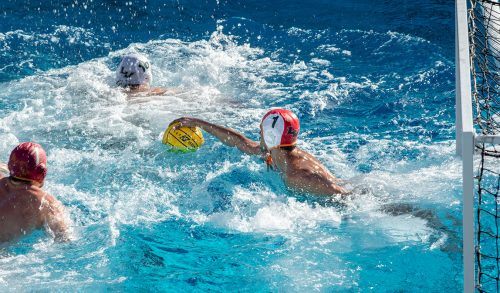 Senior goal keeper Ian Hernandez grabs the ball after an attempted goal by Claremont-Mudd-Scripps. The Leopards fell to the Stags, 12-10. / photo by Veronyca Norcia

The men’s water polo team traveled to Axelrood Pool in Claremont on Saturday and suffered a loss to Claremont-Mudd-Scripps, 12-10.

With the loss, the Leopards fell to 8-20 overall and are riding a six-game losing streak.

“Even though we came out on the wrong end of it, this was a fantastic result against a great opponent,” head coach Pat Beemer said. “I think we came out with a much better mentality to compete.”

A strong first quarter performance provided a two-goal cushion that lasted throughout much of the match for CMS. The Leopards kept up their fight, but could not overcome the deficit.

“We had to make sure we competed with them the entire time and we had to be relentless into getting the result we wanted,” senior goalkeeper Ian Hernandez said.

CMS came out more aggressive and more dominant in the first quarter and took control of the game in the opening minutes.

Attacker Evan Monterroso and defender Rex Sample, both juniors for the Leopards, did their best to cancel out CMS sophomore defender C.J. Box’s first two goals.

The Stags’ confidence grew after their constant counter attack had the Leopards winded before the first quarter was over.

Freshman attacker William Clark and junior defender Ethan Lewis each added a goal for the Stags to give CMS a comfortable two-goal lead going into the second quarter.

Constant pressure by CMS caused quick counter attacks that the Leopards struggled to deal with. However, the Stags could not keep up this system beyond the middle of the second quarter and the Leopards began to respond to CMS with tactical changes of their own. The Leopards began working the ball from the outside in order to get a quick cross in for a finish.

“We focused on trying to stay in system, build up the team chemistry, and become more comfortable and confident with each other,” junior attacker Joseph Sabers said.

This change in attack saw the Leopards grab the first goal of the second quarter. But CMS countered with four goals of its own.

Freshman center Michael Staine scored the opener after 27 seconds and junior utility player Charles Ortega scored two goals for the Leopards after finding the net with 6:57 to play and 1:55 to play in the second.

Down 8-5 at intermission, the Leopards came out looking like a brand new team after halftime. CMS saw its lead slip away as Ortega started the comeback for the Leopards. Sample equalized by bagging himself a third quarter hat trick in under four minutes to tie up the score, 9-9.

Sophomore attacker Koss Klobucher put CMS back in front with a goal with 1:55 left in the third, and Thomson found the net as time expired in the third to give CMS an 11-9 lead going into the fourth.

“We were down by two going into the fourth quarter so we had to limit CMS’s opportunities by playing good defense,” Ortega said.

In the fourth, CMS struck first with Lewis with 6:48 left to play and the Stags began to drain the clock to see the game out.

The Leopards conclude their season against Occidental at 11 a.m. Saturday at the La Verne Aquatic Center.