By Jocelyn Arceo, Melody Blazauskas on November 16, 2018 in LV Life 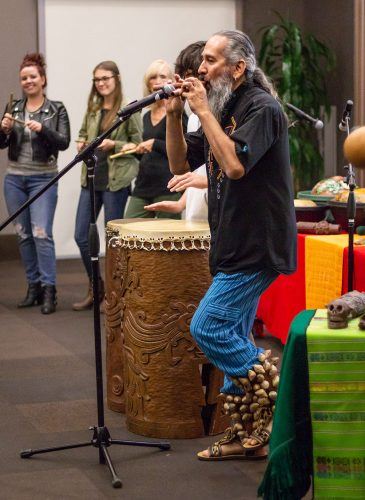 Aztec Stories program director Michael Heralda spoke at an event hosted by the Multicultural Club Council to highlight the Aztec culture Tuesday in the Campus Center Ballroom. Heralda and his grandson, Noah, helped share the Mexica culture through poetry, music and storytelling. / photo by Melody Blazauskas

Michael Heralda, an Aztec storyteller, provided an interactive performance depicting the Aztec or Mexica culture through song and story Tuesday in the Campus Center Ballroom.

The Multicultural Council put the event together as part of Indigenous Heritage Month.

The president of the club, Yulvi Reyes-Solorio, said it was important to host these events because although the University is a Hispanic Serving Institution, it does not provide enough programing related to the Hispanic culture.

Heralda, clad in bright blue pants and a rattling anklet he called Chachayotes, informed an audience of roughly 30 people that the former Aztec people knew themselves as Mexica.

Throughout his performance, more than half of the audience members tried out the various Mexica instruments that Heralda brought along with him.

Heralda opened with a poem he had heard years prior from a young Mexica poet, describing the pride he felt in regards to his Mexica heritage and culture.

The words, originally in Nahuatl, were translated by Heralda to mean:

“I sing today, I am proud to be Mexica. If tomorrow I would die, I still would be Mexica.”

Throughout the program, Heralda taught the audience about different instruments, like a clay flute he called Tlapitzalli, or the two large grandfather drums that go by the name of Huehuetl.

“The indigenous people on this continent have a very powerful belief that once something exists it will always exist, but the energy will transform,” Heralda said. “Just like we see the changes that go on everyday…we see these cycles of transition.”

Transformation, transition and duality were major themes of discussion during the program.

He spoke about the transition from sound to silence, life to death. He also discussed the feminine and masculine duality that is present in all human beings.

“Every single one of you is both masculine and feminine,” Heralda said. “The human body is a temporary vehicle that we utilize to maneuver through this human experience…it is not who we are. It is what we use to experience life, this single life,” Heralda said.

“The beauty of this concept is that once you realize that everybody is both masculine and feminine, that the body is a temporary vehicle, then you begin to eliminate any stereotypes you may have.”

His discussion regarding the duality of femininity and masculinity led to the explanation that once we truly understand that concept, we can eventually understand who we really are and where our potential may lie.

After the eighth song, the program ended with Heralda opening the floor and inviting all audience members to try out the different instruments he had on display.

At least ten audience members stayed after to view the instruments with Heralda.

“I haven’t really felt this energy anywhere else, other than in this room,” said Mary Thomas, West Covina resident. It’s very unique and I enjoyed it a lot. It wasn’t a negative energy that was here, it was positive.”

Her friend, Miranda Tejeda, a sophomore theater major, said the room felt like family and reminded her of the Mexican household in which she grew up.

“The stories he would tell really controlled that energy and the positive aspects,” Tejeda said.

Reyes-Solorio said that the Multicultural Council will continue to put on culturally diverse events because she feels that the University and the Campus Activities Board are not doing enough to offer events that are both educational and fun.

“If the institution wants to only have events that are just fun, when is the education coming in?” Reyes-Solorio said. That’s our goal. We try to bring different programming by asking students about their culture, and what they would like to see.”

She said although not all students may be Latinx or indigenous, to have compassion and empathy toward each other we must learn about our different backgrounds.

The Multicultural Council invites student feedback and wants to know what other programs the student body would be interested in, Reyes-Solorio said.