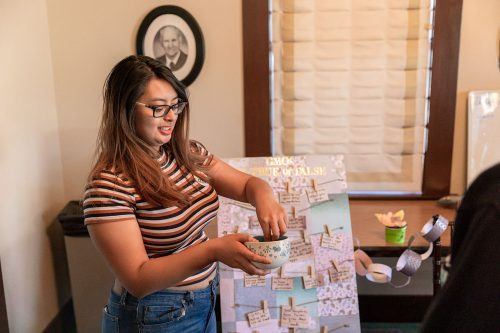 Junior biology major Angelica Sabandal conducts a true or false game on genetic modified organisms in the Hanawalt House Nov. 28. The event was hosted by the senior honors students in the biology department. / photo by Jaren Cyrus

Students in the honors program held an event that informed the public about genetically modified organisms in our foods as part of their senior project Wednesday in the Hanawalt House.

The event was organized by six seniors with several stations for students to visit and educate themselves about GMOs.

The seniors’ goal was to inform the public of the benefits of GMOs and how they are not as harmful as some make it seem.

“There is a lot of misinformation from separate groups and what actually goes into GMOs and how it affects our community,” said senior biology major Nicole Gomez.

At the event they provided a tasting station with fruit – one contained GMOs and another organic fruit did not contain GMOs.

Students were able to taste the fruit and try to guess which one was which.

“A lot of the food we eat is genetically modified,” said senior biology major Charonne Razafindralay.

“We wanted people to see whether they taste a difference in the GMO and non-GMO fruits.”

The students also created a documentary for their project, asking students around campus what they thought about GMOs.

The seniors also teamed up with two student clubs, the Society for Advancement of Chicanos and Native Americans in Science and the International Genetically Engineered Machine club, to also provide a booth at their event to give additional information to the public about GMOs.

“This event is to lower the fear of GMOs because a lot of people hear GMOs and freak out,” senior biology major C.J. Woodward said. “There is a lot that can be done with GMOs that can help with agriculture and other things not food related.”

He said there is a lot of fear about GMOs, but they are not as harmful as some may think.

“Do not be afraid of them,” Woodward said. “We can eventually lower the restrictions on them, allow things like this to help the overall food supply of the world be better for everyone and help feed 8 billion people.”

The event helped inform students about facts and misinformation about GMOs they may have heard about.

“There is a lot of negative stigmas about GMOs,” said senior anthropology major Rachel Fox.

“A lot of people are uneducated about them. They just believe the bad things about GMOs, but they are really helpful. It is important for students to come to events like these.”