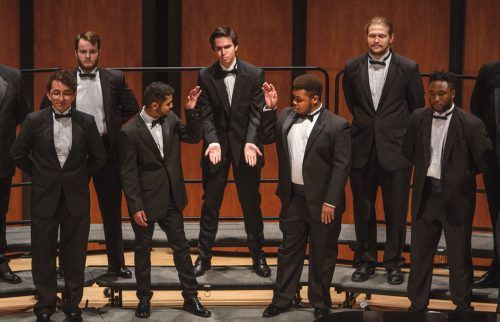 The chamber singers perform “Sound Off” Friday at the “True Colors” concert in Morgan Auditorium. The piece is a rhythmic dialogue between the British aristocracy and a U.S. Army drill sergeant. The concert was a visual array of colors and their relation to the pieces performed. The idea had to do with synesthesia, or seeing the music along with hearing it. / photo by Melody Blazauskas

As the audience sat underneath a splatter of colors, the University Chorale and Chamber Singers performed “True Colors: Exploring Diversity Through Musical Expression” Friday in Morgan Auditorium.

Assistant Professor of Music Irene Messoloras, who conducted the concert, explained the concept of synesthesia, a term used to explain people who can not only hear sounds, but actually see them, before the concert began.

As the audience took their seats, the lights turned off and a display of splattered colors were projected on a screen as gentle music was played.

The aspect of synesthesia tied in with the array of different colors displayed during each of the songs performed.

The show opened with the Chamber Singers’ rendition of Cyndi Lauper’s 1980s classic, “True Colors,” which could not have been a better opener for the show considering the title behind the entire performance.

“Sound Off,” by the Chamber Singers Men’s Choir, which featured a display of yellow lights on the side panels of the room drew laughter and applause from the audience.

“The ‘Sound Off’ piece had to be my favorite because it was performed so humorously and made everyone enjoy the song,” Valerie Aguayo, Baldwin Park resident, said.

The song portrays a conversation between an R&B singer and a member of the British aristocracy being moderated by a U.S. army drill sergeant.

“The R&B singer is trying to persuade the member of the British aristocracy to kind of just like let loose, and join me, come on hangout with me, let’s have a party. You really hear the colors and different parts of sections within this piece,” Messoloras said.

The piece included beats from a paint bucket being used as a drum, and the audience could not take their eyes off the performance as the choir members began dancing along to the beat of the music.

Messoloras said that diversity and emotions are easily portrayed through colors and music.

“We believe that these colors make us beautiful, powerful and relevant. We’re so happy to share this with you tonight.”

The show closed off with the Chorale and Men’s Choir singing “This is Me,” a song from the recent film, “The Greatest Showman.”

The song was inspiring, with lyrics that told a story of being unapologetically yourself and having no shame in that.

“This theme of diversity and inclusivity definitely paid off with a lot of the controversies that have been going on, on campus and in town hall,” chorale member Oceano Marshall, junior communications major, said.

“I definitely feel like the music here makes a difference, and it’s one of the most impactful mediums there is. I feel there’s a lot of power in music.”

The performance was bright, displaying all the colors of the rainbow on the side panels as a way to show equality.

“You know with everything that has happened on campus, this show is very relevant,” chorale member Preston Parker, senior broadcasting major, said. “Getting everyone together to notice that our differences are beautiful, that we are all beautiful, that we all need to learn and grow and feel all these different things.”

He briefly explained how important the music department has been since coming to ULV.

“Since freshman year I’ve been having a ball in this music department, it’s so fun,” he said. “The repertoire is so diverse and inclusive and we truly get to send a message to the audience, that’s my favorite part.”

The next performance for the University Chorale and Chamber Singers will be their Holiday Spectacular at 6 p.m. Dec. 9 in Morgan Auditorium.