By Campus Times Editorial Board, Danielle De Luna on November 30, 2018 in Editorials, Opinions 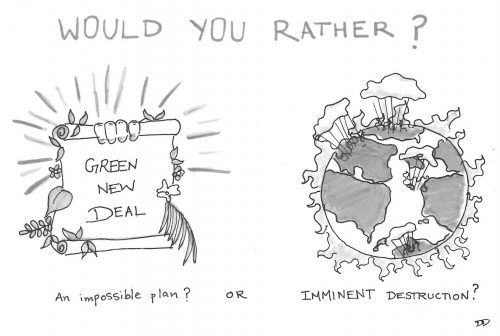 Alexandria Ocasio-Cortez, a newly-elected Democratic representative for Congress from New York, is leading the campaign for a comprehensive carbon reduction and jobs program called the “Green New Deal.”

The Green New Deal would help transition America into 100 percent renewable energy, and reduce the country’s greenhouse gas emissions all while attempting to reduce income inequality.

This select committee would be responsible for developing detailed plans of environmental mobilization, as well as any legislation required to enact the plans.

More specifically, the special committee will be responsible for developing a 10-year plan to make 100 percent of national power a form of renewable energy. Other goals include upgrading all residential and industrial buildings to improved energy efficiency, decarbonizing industries such as the agricultural and transportation industries, and providing funding for the capture of greenhouse gasses.

The plan outlines for the United States to eventually become “the undisputed international leader in helping other countries transition to completely carbon neutral economies and bringing about a global Green New Deal,” according to Ocasio-Cortez’s website, ocasio2018.com/issues, detailing her stance on the Green New Deal.

Through this plan, the committee will also be helping to reduce income inequality by creating jobs through the new legislation. According to the website, the plan must also provide an equal opportunity for all to participate in the transition to clean energy, especially “low-income communities, communities of color, indigenous communities, rural and urban communities, and the front-line communities most affected by climate change.”

Essentially, this committee must strive to decrease income inequality while simultaneously promoting economic security for all while in the process of transitioning into the Green New Deal.

Various congressmembers have agreed with the New Green Deal, such as Science Committee Member Eddie Bernice Johnson, Natural Resources Committee Chair Raul Grijalva and New Jersey Rep. Frank Pallone, all of which have vowed there will be a hearing in regards to the deal starting next year.

With that being said, it is important for society to begin taking both of these issues seriously, and the Green New Deal is the perfect way to start. We should all support progressive changes in legislature such as this one.

Our credit has reached its max and the bill has come due. No matter how emotional the pleas to save the environment, the hard truth is unless there is some form of immediate action, the world will not recover.

We have already been warned of a temperature increase that would be responsible for extreme heat, droughts and poverty as a direct result within the coming 12 years. With that said, 12 years seems a very short amount of time to produce radical change to save our environment. However, this 12 year estimated time frame should only push us to act sooner, quicker and with far more intense reform.

Overall, the Green New Deal sounds promising and genuine in its attempts at combating climate change, something said to worsen exponentially within 12 years, and income inequality, an issue only worsening as the years go on. We need to all rally together for this radical, necessary change that the Green New Deal can bring.