By Jocelyn Arceo on December 7, 2018 in Columns, Opinions 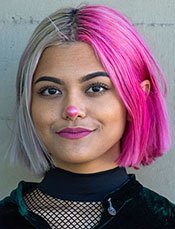 Our society has a major issue with the sexualization of underaged children in the media. However, this does not mean that using children as models for their own clothing and age range is sexualization.

The sexualization happens when 14-year-old child stars are being described as the hottest of the year, or when a grown adult woman is modeling as an innocent, underaged girl to make advertising more sexually appealing.

In the past, American Apparel has taken a minimalist approach in their advertising campaigns – many of the models being half-naked or undressed in a pale-white background, more often than not. However, that is not necessarily the issue. The issue comes up when those advertisements have models posing on their stomachs in a child-like manner, feet in the air and blowing bubblegum in their mouth. These advertisements play on the image of childish naivety.

The long-known archetype of the “sexy school girl” is still common all across the world. Whether that be through various versions of Halloween costumes, lingerie or the more troubling Japanese school girl industry, “Joshi Kosei,” that allows men to pay for various activities with schoolgirls. The Joshi Kosei industry previously used underaged girls, literal school girls, for their commercial gain.

This has since ended as of 2017. The industry now only employs those who are of age – but still manages to profit off of the use of pedophilia.

Aiming to look and act like a child in a sexual manner for commercial gain is just as horrific as if an actual child was used in doing so.

The high fashion industry preys upon girls who are small enough to look like pre-pubescent children, dressing them in polka-dots and baby doll dresses, only perpetuating the issue of children being sexualized in the wide-spread media.

Let us not forget the popular memes all over Twitter showing pictures of full-grown adults with the caption, “she’s in your bed but she’s 16, what would you do?” Or the “if she 16 I’m 16” format that some would call a joke, but really only perpetuates a culture of child predators.

Users on Twitter have gone as far as to come to the aid of those who sleep with minors because they look like adults, stating that if she “looks and acts grown, she is grown.”

This rhetoric is disgusting, and only feeds into the corporate pedophilia that so many decide to look over because it is simply “what sells.”

The sexualization of children has become so normalized in mainstream media that Ali Michael, a 27-year-old model, found nothing wrong with telling 15-year-old “Stranger Things” star Finn Wolfhard to “hit her up” in four years, when he is no longer a minor.

This sexualization of minors has become so normalized that Wolfhard’s co-star, Millie Bobby Brown, was named one of the hottest actresses of 2017 by W Magazine at only 14 years old.

This sense of corporate pedophilia runs rampant throughout not only American society, but society across the globe. It seems as though cultures can agree upon one thing – childlike youth and naiveté are sexy.

Can this be in part due to the fact that our society is completely patriarchally driven? The male gaze has accepted, and continually desired, this childlike sexuality that remains so common in mass media.

The issue seems systemic, making it appear as that much more difficult to combat. However, we as a society need to stop feeding into the narrative that exploiting children for sexual and financial gain is simply just something that happens.

We need to hold accountable those responsible, and we need to protect children from this kind of inherent abuse.

Jocelyn Arceo, a junior journalism major, is arts editor for the Campus Times. She can be reached by email at jocelyn.arceo@laverne.edu.