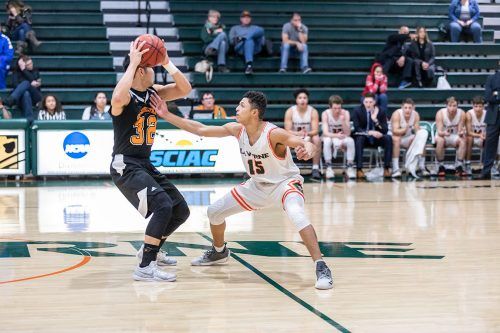 Despite keeping the game close late in the second half, the Leopards were unable to secure a win, falling to the Occidental, 77-73, on Wednesday at Frantz Athletic Court.

After a going 1-1 at the UCSC Thanksgiving Classic, the men’s basketball team looked to pick up another win against their undefeated conference rival, Occidental, in their Southern California Intercollegiate Conference opener.

La Verne entered the game with a 1-3 overall record and Occidental sported a 5-0.

“The biggest thing was to try and limit their offensive rebounds, trying to limit our turnovers, and overall try to force them to take bad shots,” senior center Evan Gustafson said.

Head coach Richard Reed had a difficult job this offseason –filling huge gaps in the roster left by graduating seniors.

Because of this the squad he has put together is very young and lacks experience.

“Over the course of the last two seasons we’ve graduated about 12 to 13 guys. We tried to fill some needs we needed to address so we brought in nine freshmen to fill those holes,” Reed said.

Unlike many of their previous losses, La Verne started the game full of energy, leading to an early 6-0 lead thanks to quick scores by Gustafson and senior guard Alec Vucinich.

But after La Verne’s quick flurry of baskets, the Tigers managed to claw the lead back after taking advantage of the Leopard’s sloppy turnovers on offense.

The Occidental offense was a two-pronged attack, with seniors Zach Baines and Austin DeWitz leading the team in scoring, racking up 19 and 11 points in the first half respectively.

“We wanted to play hot and bring the intensity,” freshman point guard Sinai Enoch said. “We wanted to keep their leading scorers from getting on the board and in the paint because we’re a little undersized.”

Though the Leopards held strong on defense and were able to keep the score even at 18-18. But with five minutes left to go in the first half, both teams went all out on offense as the game quickly progressed into a shootout.

However Occidental would eventually pull away with the lead as La Verne began to stall on offense, ending the first half 43-32, Occidental.

After halftime La Verne came out firing on all cylinders, with junior guard Luke Evans sinking a three point jump shot to start the half.

Allen completed the three-point play by making the free throw.

DeWitz continued to come up big for the Tigers, shooting them back in the game to stretch their lead 57-44 with 13 minutes left in the half.

Fortunately, Enoch had a standout game off the bench for the Leopards, nailing back to back threes cutting Occidental’s lead to six.

The freshman would finish the game leading the team with 15 points, shooting 5-9.

“Honestly it was a little difficult for me at first [transitioning to college level], the pace of the game is much different,” Enoch said. “Guys are more aggressive and are a lot stronger.”

As Occidental’s lead diminished, La Verne did not relent and began to pick up the pace.

After layup from Allen, sophomore point guard Tevin McClain managed to steal the ball away from Occidental’s Ryan Kaneshiro, and dished it to Vucinich who nailed the ensuing layup – causing the home crowd to erupt.

Gustafson proved to be clutch in the paint for the Leopards, getting a crucial defensive rebound to set up sophomore Michael Curley who sank a three point shot from downtown to tie the game, 62-62.

The Leopard offense also displayed patience and ball control on offense, being able to spread the ball around the court with ease.

But the Leopards were still unable to slow down Baines and DeWitz, each of whom continued to make clutch layups and free throws to continuously give Occidental the lead back.

Baines and DeWitz would finish the game with 27 and 23 points respectively.

With the Tigers taking the lead back 71-69, the game reached its breaking point when McClain missed a jump shot only to have Vucinich slam the ball back in for a put-back dunk, sending the crowd into an uproar.

“[McClain] put up a shot and I was going in for the rebound and when it tipped in my direction I was able to finish it,” Vucinich said.

In spite of La Verne’s highlight plays, clutch free throws from Baines would eventually put the Tiger’s lead out of reach, sealing the game, 77-73, Occidental.

Despite the loss, players feel that they performed well and are excited to see glimpses of the team’s potential.

“I’m proud of the fight we had. We were down double digits that first half and we came back and lost by four,” Gustafson said.

“The fact that we put ourselves in that hole and we were able to fight back and take this game down to the wire, I think it’s great.”

Much of the synergy problems plaguing the team seem to have passed, as players credit their newfound intensity to their much improved team chemistry.

“We’re getting used to playing with each other and we’re trusting each other more,” Enoch said.

The Leopards travel north to Washington on Saturday, where they will play Whitworth at 1 p.m.

“We have no business playing a conference game in December,” Reed said. “I don’t get to make the schedule. With our younger group we’re not ready yet. We’ll get there. We’ll be a different team by January and February as long as those guys in the locker room keep believing, one day at a time.”