By Ariel Torres, Destinee Mondragon on December 7, 2018 in LV Life 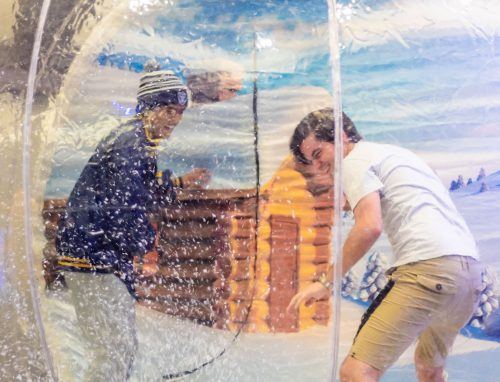 Freshmen broadcasting major Jacob Barriga and business administration major Jacob Martin have a snowball fight in a large inflatable snow globe in the Campus Center Ballroom Thursday at the Campus Activity Board’s Holiday Extravaganza. The event had crafts and food from all over the world including latkes, orange chicken and Mongolian beef. / photo by Ariel Torres

The Campus Activities Board’s Holiday Extravaganza Nov. 29 spanned three floors of the Campus Center, with each devoted to a different winter holiday.

The second floor was decorated for Hanukkah and Asian Lunar New Year. On the Hanukkah side, activities included creating Stars of David with popsicle sticks, coloring menorahs and eating potato latkes.

For Lunar New Year, there was a hand-drawn Bodhi tree which students could use to post their thoughts on sticky notes, create lanterns and eat Asian cuisine.

“They are really big on enlightenment,” she added.

“I hope from this event, that people understand that December isn’t only about Christmas,” said sophomore biology major Itzia Chavez.