By Molly Garry, Natalie Gutiérrez on February 15, 2019 in LV Life 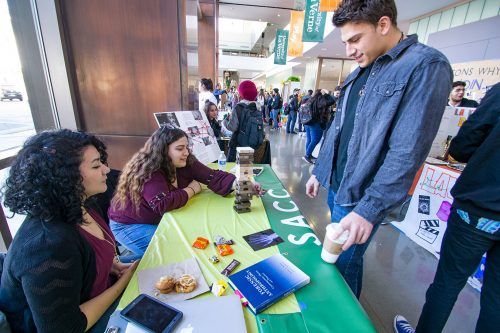 The Campus Activities Board hosted the club fair on Feb. 6 with a club booth competition where different clubs decorated booths based on their favorite Netflix movies or series.

The club booths with the most creativity and originality were chosen as the winners.

The Choral Music club took first place with their “The Get Down” themed booth.

LeoFM played music and gave clubs the opportunity to advertise themselves to students on all three floors of the Campus Center.

The club fair is an opportunity for all students to learn how to get involved on campus and discover and learn about the different cultures in the community.

Arianna Govea, freshman psychology major, is currently a member of Her Campus, a club dedicated to writing articles for the online magazine, Her Campus.

“What I like most about Her Campus is that we are able to express ourselves through our writing,” Govea said.

The Chinese Student Scholars club decorated their booth to the theme of Chinese movie “Us and Them” and handed out traditional Chinese candy.

“Our club’s purpose is to create a sense of community for all Chinese students here,” club president Hongyu Tao said.

Chinese Student Scholars helps other students with things such as finding an apartment to rent or a car to buy.

The club members also spend time studying together. There is currently forty members and they hope to keep growing this semester.

Greek life was also present at the club fair, with Mu Phi Epsilon advertising itself as a co-ed music fraternity.

“We try to spread joy and happiness through music in school and in the community,” Mu Phi Epsilon member Rebekah Lovejoy said.

The fraternity incorporates all types of music like Latin, salsa and jazz.

“Mu Phi Epsilon is open to everyone, even for those of you who think you can’t sing,” Lovejoy said.

Another club that aims to bring cultural awareness to the campus is the Hillel club.

The Hillel club is planning on doing a collective event with University of La Verne’s Common Ground club or with a Hillel club from another campus such as Cal Poly Pomona or the Claremont Colleges.