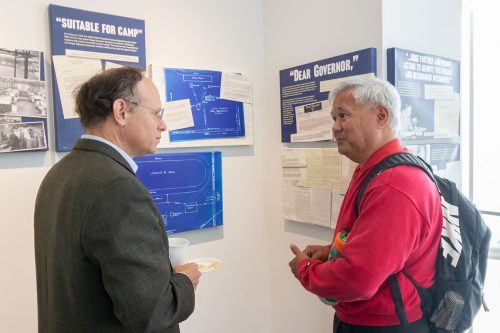 Professor of Kinesiology Paul Alvarez shares with Kenneth Marcus, professor of history, his personal stories connected with the “Architecture of Internment” exhibit at a reception for the exhibit Tuesday in the Campus Center. Members of Alvarez’ family were incarcerated in the Japanese internment camps in the 1940s. The exhibit runs through Feb. 28 in the West Gallery. / photo by Ashley Villavicencio

“Architecture of Internment: The Build Up to Wartime Incarceration, Oregon, 1941-1943” visually captures the decision of Oregonians to incarcerate Japanese Americans and Japanese immigrants in the 1940s during World War II.

The exhibit in the West Gallery of the Campus Center displays images of personal letters, photos and architectural blueprints on the interment camp sites, among other reminders of this dark time in American history.

The Fairplex in Pomona held was one of the sites of interment camps, holding thousands of people of Japanese ancestry without any process or criminal charges during that time in history.

This internment was determined unconstitutional by the Supreme Court in 1945.

However, it was not until 1980 that a Congressional commissioner declared these imprisonments were motivated by racial discrimination and war hysteria.

It is important to reflect on our collective behavior then as it is now, said Dion Johnson, director of University galleries.

“Do we (offer) humanitarian aid, compassion? Or do we regard them as criminals with family separation?” Johnson said.

“I think this exhibition is a really good opportunity to understand personal stories and histories and how families have dealt with this and how it is important to this day,” he added.

Kenneth Marcus, professor of history, said the internment of Japanese and Japanese Americans, though abhorrent, is commonly noted as a footnote.

“Although it is certainly true that the incarceration camps were not like the concentration and death camps in Europe, it did happen here on our soil and it was a violation of civil rights,” Marcus said.

“What this kind of exhibit presents … is to keep in mind that these events did happen on our soil, and even a couple blocks from the school in the fairgrounds (yet) it took decades to get a plaque to acknowledge the event.”

Professor of Kinesiology Paul Alvarez had a personal connection to the exhibit, as members of his own family were incarcerated in the camps.

It makes one stop and think about what is important, he said.

“What are you passionate about?… Workers’ rights? Women’s rights?” Alvarez asked. “This is a great example of what happens when too many people don’t step up and say ‘this is wrong.’”

The exhibit will run through Feb. 28 in the West Gallery on the second floor of the Campus Center.