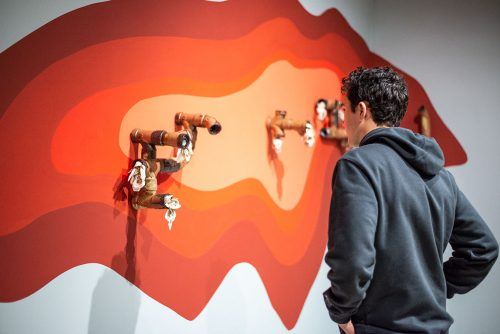 Nicholas Michael, Pomona College freshman art and art history major, studies the ceramic exhibition of Courtney M. Leonard, a multimedia artist. Her artwork and ceramic pieces represent the relationship between indigenous fishing techniques and the aquatic environment. Leonard attempts to cover a different environmental issue through her art work every year and attempts to bring awareness to crucial concerns within our ecosystem. / photo by Nikky Huynh

Pomona College Museum of Art hosted an exhibit Feb. 8 focused on the ecological issues that whales and indigenous communities face.

This exhibit was an extension of her ongoing work titled “Breach.” Every year, she observes what is currently affecting the ecosystem and incorporates that information into her exhibits, Leonard said.

These installments bring awareness to the negative affects shipping ports have on whales and the sustainability of indigenous communities.

The ports are used for massive shipments that typically result in whales being struck and killed during the process. One of the biggest impacts to our ecosystem are the ships killing whales, Security Information Officer Maddy Woodward said.

Negative impacts on our ecosystem are what Leonard is trying to bring to light through the use of her artwork.

In her culture, the Shinnecock Indians from Long Island, New York would use whales for food and warmth to help them survive through the winter, Leonard said. The Indigenous communities way of enduring the winter has been significantly impacted due to the ports.

In the exhibit, there are baskets full of sperm whale teeth made out of clay used to represent the whales being killed.

The artistic installation brings awareness to water systems and how they have changed over time. At the exhibit there are pipes lining the walls with shells sticking out used to portray how humans have invaded the oceans habitat. The pipes represent oyster shells that once were the oceans natural purifiers.

“This exhibit was very interesting and informing. There were things that I learned. For example, the oyster shells being natural purifiers,” said Stephanie Parks, Rancho Cucamonga resident. “With the objects and videos, this artwork brings awareness to the changes that have happened over the years.”

Leonard used various mediums that depicted the whales, ocean and the invasion of humans.

“It is very interesting how the artist used different objects to convey such a strong message. I learned a lot and have a different outlook on how our animals and ecosystem are being treated,” said Jasmine Almaraz, El Monte resident.

“I also never knew that ships were making such a big impact on our whale population.”

The point of the installation is to show how changes in civilization and our system of importing and exporting goods through ports are changing the water’s ecosystem and harming whales, only furthering the negative affects on indigenous communities. The ocean has changed drastically due to these shipping ports, and this change affects far more than just the creatures under the sea.

Leonard’s installation will be displayed at the Pomona College Museum of Art through May 19, with free admission.