By Nicolette Rojo, Stephanie Ball on February 15, 2019 in News 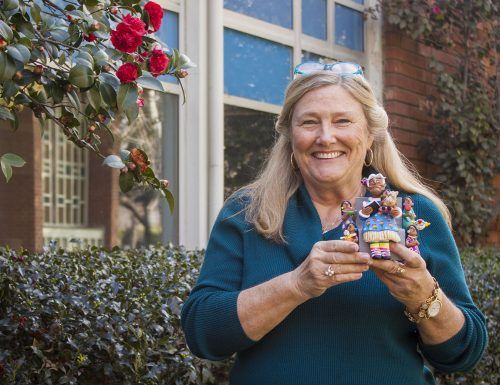 Dr. Kimberly Martin, professor of anthropology, loved collecting dolls and traveling. One of her favorite pieces was a clay sculpture of a storyteller from Oaxaca, Mexico. Dr. Martin died on Jan. 7 / file photo by Stephanie Ball

A memorial service was held Jan. 20 at the Rancho Santa Ana Botanic Garden in Claremont. Roughly 80 people attended, including family and former and current students.

She lived in Claremont for over 40 years, where she raised her family.

“She loved the University of La Verne, and she was so proud of this university,” said Hilarie Kelly, adjunct professor of anthropology. “She convinced me to come here and she was so passionately committed to … building the program.”

Dr. Martin established a few of the program’s key courses, including Issues in Anthropology and Women’s Experiences in the United States, after researching women’s lifestyles across the country.

She took anthropology students on international study tours to India and Egypt, but is known for her work and research in Oaxaca, Mexico. Accompanied by Sharon Davis, professor of sociology, they guided students throughout the city and its valleys to learn about local industries.

“Mexico was very near and dear to her heart,” Davis said. “It was a very important country to her.”

Dr. Martin led students in an excavation of the site of the Lordsburg Hotel, where Sneaky Park stands today. Her work in the classroom helped students adopt practical research methods prior to senior project, and she wrote a book that improved their knowledge of research methodology and topic selection.

“She was a real spokesperson for her students and always had them in mind first,” Davis said. “She loved people (so) wholeheartedly, that sometimes, she would forget about herself.”

Provost Jonathan Reed first met Dr. Martin when he began teaching at La Verne in 1992. They had numerous collaborations in archaeological and anthropological topics.

“She was a strong advocate for student success,” Reed said. “She was successful in creating a curriculum that led many of her graduates to go on to (earn) graduate degrees.”

“It was very evident that she loved the world and the people in it,” said Lisa Delance, adjunct professor of anthropology. “She took so much joy in seeing the diversity of the world. She had students from all different research areas… and she encouraged them to branch out, even into stuff that she wasn’t necessarily familiar with.”

Dr. Martin served two terms as president of the Southwestern Anthropology Association. She hosted the annual conference twice, which gave students the chance to present before professionals. She is survived by her son William Martin, daughter Josephine Kowalesk and six grandchildren.