By Jaren Cyrus, Natalie Gutiérrez on February 22, 2019 in News 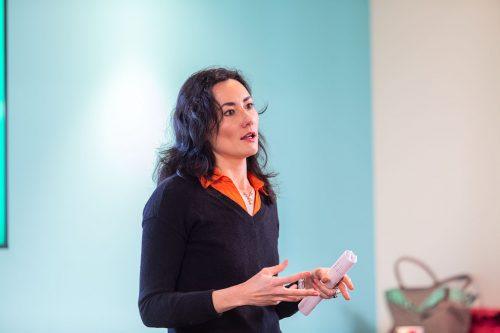 Astrid Keel, associate professor of marketing, discusses the history of pricing differences between digital and print magazines Tuesday in the Executive Dining Room. She also discussed readers’ preferences and how magazines have adjusted to change economically. / photo by Jaren Cyrus

“Magazine sales have been declining … but on the flip side, there has been a huge growth in digital content,” Keel said. “Consumers presume that cost saving is involved in not having to print.”

Digital content pricing fluctuates, she said, adding, that when magazines converted to online formats, many posted the full content for free. Then publishers realized they were losing revenue, so some began to charge, Keel said.

While nearly all magazines today have a digital presence, some people today still prefer flipping through the pages of an actual hard copy, Keel added.

For her research, Keel ran an online survey that examined what determined the perception of print and digital magazine pricing.

The survey asked readers whether they preferred print or digital, and which one they thought was priced higher.

“The more confident [the respondents], the less likely they were actually to be right,” Keel said.

Sara Crespo, senior studio art major, attended the Tuesday lecture, and said she was shocked that the digital magazines are priced higher than the print version.

Leopard Scoreboard
Winging it with the Phi Delts