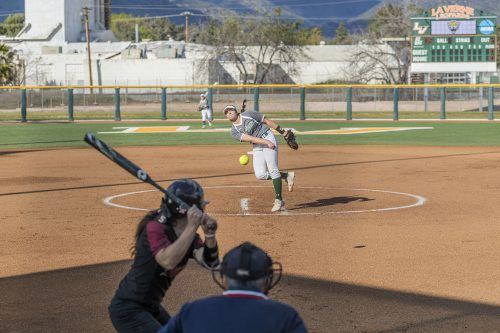 Sophomore pitcher Jiana Rojo squares off against Whitworth in the first inning of game two Saturday at Campus West. The Leopards won the first game of a doubleheader, 3-2, and the second game, 1-0. Rojo finished the game with six strikeouts, six hits and one walk. / photo by Jaren Cyrus.

La Verne softball pulled away from Whitworth in a 3-2 win Saturday, at Campus West. Softball would go on to sweep Whitworth in their two-game series.

The Leopards began with a slow start, senior right fielder Sienna Kendricks connected with a hit in her first at bat to energize the team.

Going into the second inning the Leopards were prepared to take the game back in their hands. Senior left fielder Rachel Ogata made a big play for the Leopards by stepping forward to catch a deep line drive.

Leopards junior pitcher Katheryn Navarro brought the heat early in the game making it difficult for the Pirates to bring in a run.

Navarro’s pitching efforts showed in the result of the game, which came as good news to interim head coach Henry Moranchel.

“Pitching was the biggest thing and there were a few things we needed to clean up from last week,” Moranchel said.

In the bottom of the second the bases were loaded with Ogata up to bat, junior third baseman Justice Borden on third and senior center fielder Carly Condon on second.

Ogata connected on the pitch, leading to a Pirates error.

After getting Borden out, Condon was able to sneak in a run. Pirates’ sophomore pitcher Madelyn Carlson led the defense and struck out junior shortstop Ashley Soto, making it 1-0 La Verne.

Going into the third both teams were fired up after a series of big plays made by both teams. La Verne displayed their resilience when they were able to pick up a few outs off the Pirates bunting.

Freshman catcher Bailey Grani for the Leopards was the first to get a jump on the play to ensure an out.

The Leopards were able to separate themselves from the Pirates in the bottom of the third.

Sophomore first baseman Gabriella Underwood hit a deep ball to get a double and on base, allowing Kendricks to move onto third.

Junior shortstop Shelby Tevis was able to smack one to the Pirates shortstop giving Underwood enough time to bring in a run in to make it 2-0.

The Leopards offensive proficiency became evident as they led 3-0.

“[Anticipating an] offensive battle, [we] practiced our hitting all week.” Kendricks said.

The game was at an offensive standstill for the next four innings. During this time the Leopards defense held strong.

Throughout their standstill, Condon says she remembered the teams saying: “Let’s get some insurance runs, even if you’re up, anything can happen.”

For Moranchel, the Leopards plan coming into the game was to execute their fundamentals.

“Keep it simple and see where we are at,” Moranchel said. “They are a great measuring stick for the year.”

The Pirates made a last effort push in the final inning. With a girl on second, a home run by senior infielder Michelle Silva made it 3-2 with two outs. Navarro finished the game off with a strikeout to secure the win.

“We know every day we have to show up,” Moranchel said. “Right now we have our eye on conference.”

The Leopards advance to 3-1 overall, with their first Southern California Intercollegiate Athletic Conference game at home against Cal Lutheran at noon Saturday.