By Katelyn Keeling, Natalie Gutiérrez on March 1, 2019 in News 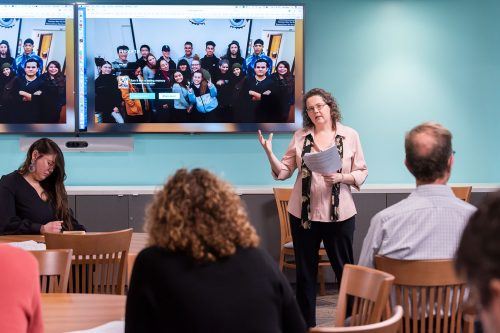 Jane Beal, associate professor of English, shared how she connected science fiction and fantasy to real-life situations in her FLEX class, Tuesday in the Executive Dining Room.

Beal said she decided to end the course with the popular apocalypse film “I Am Legend.”

The class began by discussing that the idea of the zombie originates in Haiti, its linkage to voodoo, and the reanimation of dead bodies under another’s control, Beal said.

“It can be interpreted as a cultural response to slavery,” Beal said. “The fear that if you die, you will still be under someone else’s control and the desire to be free from that is evident in the film.”

She said the zombies in the film are a symbol for the destructive reality of racism.

“This was without a doubt the most powerful night of the class,” Beal said.

“I would definitely love to take this course with Professor Beal,” Corrennti said.