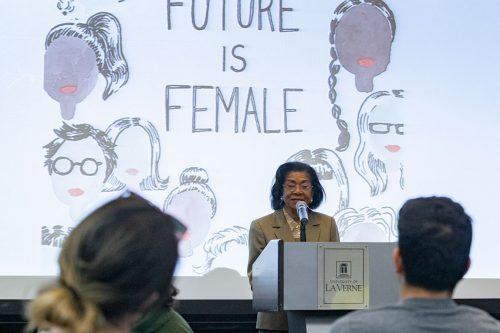 On Tuesday, March 26, in the Campus Center Ballroom Belva Davis, the first African American newswomen on the west coast, talks about how there is no more time for the, “I am right and they are wrong,” attitude, rather, women need to be sisters to each other. Her advice is to know women are capable, and to reach for her goals no matter how difficult it may be.

Belva Davis discussed her life as the first African American newscaster on the West Coast and her journey as a journalist Tuesday in the Campus Center Ballroom.

Davis’ television journalism career began in 1961, at a time when very few women were in the profession.

“The most important lesson that I have learned throughout my career is to believe in yourself,” Davis said. “Now it may hurt, you may stumble, but you’ve made a pledge to keep it, nothing can stop you.”

Davis covered protests on college campuses including UC Berkeley and San Francisco State in the 1960s and much more.

“Confidence in pitching my story ideas allowed me to go to places such as Cuba, Israel, Africa and so many others just so I could prove that I could survive,” Davis said.

While traveling to these countries, Davis said she struggled to gain the trust of the local residents.

She had to explain that if they refused to tell her their stories, then others would not know what happens in the countries they live in.

She also talked about one of the projects she was most proud of: narrating for daughters of prominent civil rights.

She traveled the country moderating for the daughters of George Wallace, Martin Luther King Jr., and John F. Kennedy.

Davis said that although these women were very different, they shared a willingness to support and understand each other’s differences while sharing the same passion as their parents before them.

“Her accomplishments are amazing, and for her to be able to share her story and struggle is truly a life lesson,” said Suzanna Bratzler, an education graduate student.

“I related (and) I feel inferior at times, but it’s those obstacles she discussed that made me realize that I could truly rise to the challenge,” Parra said.