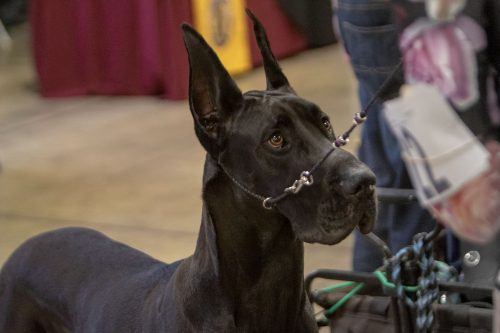 Two-year-old Great Dane Jellybean, known professionally as Candy Crush, prepares for competition at the Kennel Club of Beverly Hills Dog Show Saturday. The annual two-day event was hosted at the Fairplex and allows dogs of all breeds to compete. / photo by Ariel Torres

More than 1,200 audience members, breeders and owners attended the Beverly Hills Dog Show at the Fairplex in Pomona on Saturday, as they groomed and prepared their pets for the long day.

The dog show is a two-day event hosted by the Kennel Club of Beverly Hills, a local chapter of the nationwide American Kennel Club.

More than 1,400 dogs participated in the show, divided into seven groups by size and shape.

The official group did not start the judging round until 1 p.m. However, the anticipation was present the moment check-in began at 7 a.m., from the sound of dogs barking to owners and walkers practicing individual routines to impress the judges.

The morning part of the show consisted of the best of breed and best female and male competitions, since over 200 breeds competed in each of the nine rings.

The American Bulldog had the highest amount of entries at 48, while the Sheepdog only had one entry.

While many of the attendees are professional dog breeders, owners, family members and audience members attended for entertainment and the enjoyment of seeing all the dogs.

Monique Peralta, veterinarian medicine student from Pomona, attended her first dog show due to a family connection, along with her love for dogs.

“We were invited by a family friend as they came here before,” Peralta said. “They know that I’m an avid dog lover so I went, and I loved seeing how hard the dogs worked to get to this stage.”

The Beverly Hills Dog Show is one of two NBC broadcasted shows during the year, with the National Dog Show televised on Thanksgiving.

While not widely known as a sport, NBC Sports historically broadcasted the shows due to the vigorous training and discipline the dogs are put through, which is similar to a professional Olympic athlete.

David Frei, NBC consultant and longtime voice for national dog shows, emphasized the importance of athleticism in dogs when competing, on top of meeting the American Kennel Club’s breed standards.

“Most of these dogs do jobs that require them to be athletic, to move from point A to point B,” Frei said. “They have to do it without getting stepped on or kicked, most may have to run all day and fast, while being strong enough to keep up with what they’re doing.”

Frei said that one of the dogs is road worked by a bicycle or treadmill to keep them in condition.

“We used to argue with one of our TV partners about that; they’re athletes.” Frei said.

The dogs competed in categories based on experience, breed, size, speed and agility. Owners and walkers are often professional breeders or experienced in training and walking dogs.

Terry Denney-Combs, professional dog breeder, has competed in dog shows since 1971 and pursued competing from a friend who participated in various shows.

“I started with a dachshund and I bought a Pyrenees when I was 21 as a birthday present to myself,” Denney-Combs said. “She talked me into showing because she was into it.”

Denney-Combs’ participant was her Great Pyrenees, Louis, who won the Best of Winners, which gave him his point to finish his championship for the show.

Judges, who are also participants and breeders, are required to meet several requirements and show years of experience breeding in order to become a judge.

“With the AKC, you have to have a certain degree of involvement for numbers of years, be involved with your breed and to have bred so many generations of dogs,” Richard Eichham, AKC judge and breeder of merit, said. “Once you’re an AKC judge for your breed, then you can add other breeds.”

NBC will air the 2019 Beverly Hills Dog Show on Easter Sunday this year.