By Jaysin Brandt, Stephanie Joseph on March 1, 2019 in LV Life 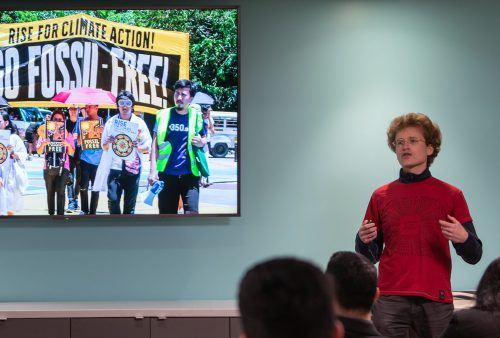 Erik Bahnson, environmental ethics major, presented his senior project on the importance of divesting stock from fossil fuel companies on Feb. 20 in the Executive Dining Room. He specified that because fossil fuels are an environmentally unstable finite resource, there needs to be preparations made now for when they run out. / photo by Jaysin Brandt

Issues of social justice and injustices were brought to light during an evening of senior thesis presentations Wednesday.

The Center for Multicultural Services hosted the event in honor of Social Justice Day in the Executive Dining Room.

The event featured the presentations based on the topic of social injustice.

Senior social justice in education major Rudy Amaya, with his group, discussed the importance of mentoring children and listening to them.

They discussed their mentoring program called Tree of Life, where they take kids on excursions and college tours.

“I am passionate about this program because of the mentors I had in my life and the children I met,” Amaya said. “A lot of times people don’t see mentoring as important, but it is.”

This program started in 2017, Amaya said. Since then, they have taken about 20 children from the Santa Ana Church of the Brethren on a tour of the University of La Verne and Cal State Fullerton.

The children visited with faculty here and even made a stop at President Lieberman’s office, Amaya said.

They help to fight evictions by informing tenants in unincorporated areas about renter’s rights. His presentation focused on the work he is producing for the organization.

Gomez Molina said he wants to bring awareness to gentrification, the process of renovating and improving a house or district so that it conforms to middle-class taste, and will help Inner City Struggle with an upcoming campaign.

Among those who attended was President Devorah Lieberman.

“I was deeply impressed that every presentation,” Lieberman said. “The presenters were very passionate about their topic. Their professors should be very proud of their research.”