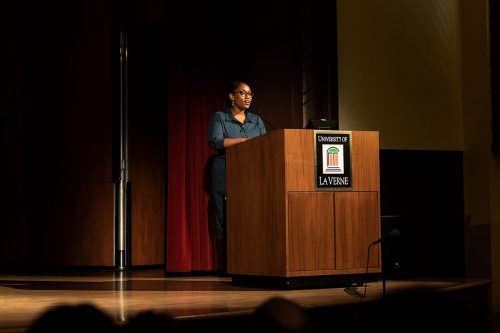 Marcia Chatelain, professor of African American studies at Georgetown University, shares stories from her book “South Side Girls: Growing Up in the Great Migration” Tuesday in Morgan Auditorium. Chatelain wrote about the 1990s crises of black America. / photo by Jaren Cyrus

Marcia Chatelain, professor of history and African American studies at Georgetown University, gave insight about the experiences of young African American girls who went through Chicago’s Great Migration after the Depression.

Chatelain’s speech was held in honor of human rights leader in the anti-slavery movement Frederick Douglass.

Chatelain said it was fitting that her speech was in his honor because children often do not understand their situation and were born into a state of the unfree.

“I think the reason why I’m so drawn to children’s history is because I’m always moved by the experiences of people who feel particularly vulnerable and feel like their options are limited,” Chatelain said. “When I think about writing about people who have to make sense of environments and changes that are nonsensical and they have no reference point, this is the place I think we can learn the most about the human experience.”

In her book “South Side Girls: Growing Up in the Great Migration,” Chatelain explores the stories of orphaned African American girls and people and organizations who helped empower them.

Chatelain said her book was written to make sense of her own upbringing in Chicago in the 1990s where she would hear stories about crises in black America.

Chatelain focused on Amanda Berry Smith’s contributions to helping orphaned or abandoned African American girls. Smith saved the money she earned from speaking tours to open an orphanage in Harvey, Illinois, where she believed the children would be protected, Chatelain said.

Building up the Amanda Smith Industrial School for Colored Girls was difficult for Smith due to meager funding, Chatelain said.

“The more they built their institutions, the less incentives the state had in taking care of black children,” Chatelain said.

Because of this the school relied on the generosity of the public, Chatelain said.

“I think our recent conversation about unaccompanied minors at our border also is provocative of these conversations,” Chatelain said. “How do we keep children who are often marginalized and vilified because of who they are and where they come from, safe and protected?”

Chatelain said she was interested in people with differing opinions and stories of people who are not viewed as perfect.

“I talk about girls that are very much a source of pride for African American communities,” Chatelain said. “The girls who do well at school, the ones who become campfire girls and girl scouts and then there are the girls who stress people out.”

Chatelain said she also focused on a program for young mothers who had unplanned pregnancies and testimonies she found in an unpublished work by E. Franklin Frazier.

In the letters young women would talk about the hardships they faced, but despite their flaws still contributed to the knowledge of youth and families.

Jacqueline Galloway Blake gave a heartfelt testimony of her own experiences in relation to what Chatelain wrote in her book.

She told the story of her parents migrating from Virginia and Texas to New York City and how her great grandfather was a slave himself.

“My sister integrated with a school in New York City. I was a part of the Girl Scouts that was integrated, so so much of what you talked about resonated with our life,” Blake said.

Anayeli Dominguez, a masters student focusing on social justice in higher education, said that despite all the work others have done, there still a lot of work to be made in making African American students feel welcomed in schools like the University of La Verne.

“Exposing the university to us is a big deal because on this campus what you see is a climate that has marginalized and is racist toward African American women,” Patel said. “Its eye opening for everybody.”

Patel said that there is a lack of cultural competency and inclusivity in the world, and that speeches like Chatelain’s bring an understanding of the struggles of marginalized groups.