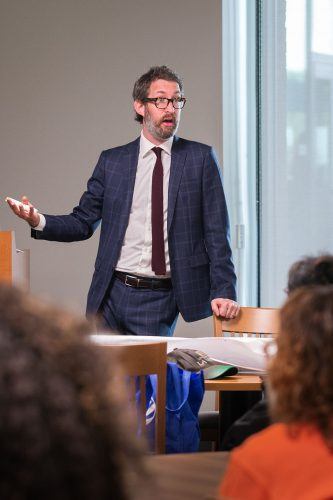 Art history professor Jon Leaver talks about historians use of X-rays to reveal changes artists make before final render, called under-paintings, and how some even reused canvases, Tuesday in the Executive Dining Room. Leaver also covered restoration processes and how art historians now know the exact steps and processes the artist preformed when making their paintings. / photo by Molly Garry

Professor of Art History Jon Leaver spoke about the art of conserving paintings Tuesday in the Executive Dining Hall.

Leaver’s lecture focused on the techniques and technology historians and art conservators use to examine art and discussed issues involved with the conservation process.

X-radiography technology allows conservators to see how time has transformed pieces of art, both in physicality and in meaning, he said.

“Images in art are important, but are not always what they appear to be,” Leaver said. “It is important for these images to be decoded for their true meaning.”

Usually when people observe art, they tend to focus on the surface of the image, Leaver said. However, the surface can change overtime. Leaver provided the example of oil paint, which can darken over the time and distort the painting.

“Art conservators will remove the varnish of the original state of the painting and apply a new coat which can brighten the colors or reduce some of the shading the artist put into the artwork,” Leaver said.

As the art changes, its original meaning may be lost, Leaver said.

“Conservation is a form of interpretation,” Leaver said. “And it is sometimes hard to figure out to which state an art piece should be restored. Should we restore it to its original state or to the state we received it in?”

“This is where conservators must decide which ideas they want to preserve and which they do not,” Leaver said.

Leaver also spoke about the Sistine Chapel, created by Italian artist Michelangelo, which is considered to have lost the essence of Michelangelo’s unique skills through conservation.

Removing dirt from the Sistine Chapel made the paintings appear glossy and new and shading in some areas of the painting was completely removed, Leaver said.

“Some people have claimed that under this conservation, what made Michelangelo an original artist was removed,” Leaver said.

However, with new technology, many conservators are able to gain a deeper understanding of artists’ intentions.

X-rays reveal the underlying layers that are invisible to the naked eye, showing the composition of materials used for the art piece, painting techniques and any alterations previously made to the art, Leaver said.

Leaver used x-rays to discover that the canvas Pablo Picasso used for “The Crouching Woman” was previously used by another artist. The x-ray images Leaver presented revealed a painting of a landscape that looked very much like a park in Barcelona beneath Picasso’s painting.

“Picasso did not create landscapes in his art, so this must have been another artist’s canvas before Picasso used it for his painting of the Crouching Woman,” Leaver said.

Salvator Mundi, another painting Leaver spoke about in his lecture, was found to be painted by none other than Leonardo Da Vinci through the use of x-rays.

The painting’s underlying layers revealed vast similarities to Da Vinci’s art style. The painting was then sold for approximately $450 million after it was discovered that Da Vinci was the creator.

Similarly to x-radiography, infrared reflectography penetrates underneath the first couple of layers and exposes an artist’s sketches before the paint was applied.

In an infrared reflectogram of the painting “Blue Boy” by English artist Thomas Gainsborough, Leaver revealed a clear sketch of a an English water spaniel in the painting that had seemed to be covered over with layers of paint.

This sketch was invisible to the naked eye and only through the use of infrared reflectography could the dog be seen.

The style in which art pieces were designed to be and the time periods in which the art was created are also revealed through the technique of infrared reflectography, Leaver said.

In the painting “The Circle of Parmigiano,” infrared technology showed cracks in the image of the painting which then led historians to conclude that the painting came from Italy in the 16th century, Leaver said.

“The different layers underneath each art piece show that a painting is much more than the image that is shown,” Pepper said. “The technology transforms the image to an actual object of history along with an artist’s personal story and reflection of the events occurring around that artist.”

The materials used in art are are also revealed through infrared technology.

Much of Leaver’s audience was shocked to know that in the painting “Interior of A Kitchen” by French artist Martin Drolling, ground-up mummy remains were used to create the pigment Mummy Brown seen in some of the shades in the painting.

Artists have reconstructed art work that reveal the strenuous process of creating art from the past, Leaver said.

Jonas Poggi, sophomore political science and speech communications major, said the advances in technology reveal much more to the viewer than what can be seen by the naked eye.

“The x-ray images Professor Leaver showed in his presentation demonstrate the true intentions of an artist and provide insight on the originating thoughts artists have before even painting the final image,” Poggi said. “Not only does the approach to the painting change but also the approach to the artist.”

Benjamin Jenkins, archivist and assistant professor of history and political science, also attended Leaver’s lecture and said Leaver has taken a new approach to ancient art that relates it to our modern world.

“Leaver has found the intersection between the old and the new,” Jenkins said. “He electrifies art history and correlates it to the 20th century through new technology, giving Renaissance art a new meaning to the digital age.”