By Campus Times Editorial Board, Danielle De Luna on March 1, 2019 in Editorials, Opinions 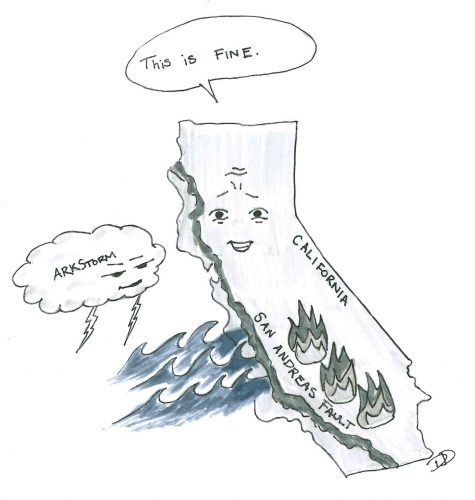 Climate change will be the root cause of a rare mega storm called the ARkStorm that scientists say will send more than 1.5 million people on the West Coast fleeing as floodwaters swamp cities and form lakes in the Central Valley and Mojave Desert.

Not only will this storm produce immense damage, a recent analysis by the U.S. Army Corps of Engineers predicts in populated areas of the Los Angeles Basin, epic runoff from the San Gabriel Mountains could rapidly overwhelm a flood control dam on the San Gabriel river and unleash floodwaters from Pico Rivera to Long Beach.

According to the U.S. Geological Survey, the winter storm aftermath could result in a $725 billion deficit – three times more damage than an earthquake along the San Andreas fault would cause.

The occurrence of this storm is unpredictable and is estimated to produce precipitation that would exceed levels only experienced in other places once every 500 to 1,000 years.

There is no denying this catastrophe is on its way. The question now is one of preparation. The ability of our federal, state and local disaster planning to handle a storm of such force is limited, and this is clearly not on their priority list. However, it should be, as this storm is predicted to cause damage unlike anything we have seen before. We need to be aware of the disasters our surroundings area are capable of, but also take note of necessary disaster preparedness steps.

Some devastating hypothetical effects the ARkstorm will have on the entire West Coast include hundreds of landslides that would damage roads, highways and homes and damage to power, phone, water and sewer would take weeks or months to restore and a $400 billion direct property loss.

The ARkStorm effects were developed by a team of 117 scientists, engineers, public-policy experts, insurance experts and employees of the affected lifelines. We cannot ignore the power this storm has in washing away a devastating portion of our population and infrastructure.

We must encourage our policymakers to focus their time and money on the detrimental effects this storm will produce and continue talking about this inevitable, inescapable and deadly storm that is quickly approaching.