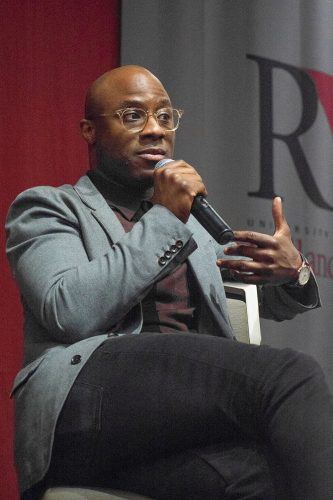 Barry Jenkins, director of “Moonlight” and “If Beale Street Could Talk,” shares insight into his filmmaking career Tuesday at the University of Redlands. He said everyone can be a filmmaker thanks to easily accessible smart phone cameras. / photo by Kayla Salas

Barry Jenkins, award-winning director of “Moonlight” and “If Beale Street Could Talk,” reflected on a particular college breakup that introduced him to the American novelist and activist, James Baldwin.

“My favorite James Baldwin work is Giovanni’s Room,” Jenkins said. “I discovered James Baldwin when I was a sophomore and I was dating a senior who was more attractive, more worldly and more intelligent. So of course when she broke up with me, she did so by giving me a copy of Giovanni’s Room.”

Jenkins spoke with ease, casualness and gratitude about his filmmaking career to a crowd of roughly 200 people Tuesday at the University of Redlands.

Jenkins shared the intricate details he weaved into the story of “If Beale Street Could Talk,” to capture the stories sweet tenderness through the main woman character’s point of view.

The movie captures the innocent young love of two black people whose devotion and strength is outlined and tested by the faulty criminal justice system.

“The history of black folks in this country has been rooted in some element of suffering since our arrival on these shores,” Jenkins said. “And yet there has always been love and family and that is the reason why black culture and black lives have endured.”

Jenkins said he wanted the audience involvement in a way that they can understand what it feels like to communicate through barriers for loved ones.

“It is one thing to walk a mile in someone else’s shoes but we walk into an auditorium and now have the opportunity to force you to put on the character shoes,” Jenkins said. “It is an intellectual concept that is made emotional through the performance.”

Jennifer Tilton, associate professor of race and ethnic studies at the University of Redlands, said she was particularly impressed with Jenkins’ ability to connect and forge community.

“Jenkins is incredibly generous and skilled at talking to groups,” Tilton said. “He has found ways to tell stories that are close and far away from him and build a community that lets him.”

Jenkins’ next project, an adaptation of the Underground Railroad written by Colson Whitehead, will consist of an 11 episode television limited series for Amazon Studios.

The story of engineers and conductors operating a network of tracks and tunnels constructed in secret beneath the Southern soil in which they were enslaved is a story that deserves to be retold, Jenkins said.

“Some people say, ‘Another slave narrative?’ Jenkins said. “You know why if you go to Germany people will be hard pressed to see a swastika anywhere? Because there has been thousands of books and movies. It is in the public consciousness. You know why I can drive 20 minutes from here and see a Confederate flag? Because it is not the same presentation so that story will be told.”

Michelle Williams, educator in San Bernardino, said she brought her daughter along to see that ordinary people can do extraordinary things.

“Jenkins is talking about subjects that have been deemed taboo but we are making them mainstream,” Williams said. “I want my daughter to see up and close a regular guy doing great things.”

Jenkins said his movie “Moonlight” was actually a mistake after plans to create “If Beale Street Could Talk,” hit a road bump.

“Moonlight,” which won a Golden Globe for best picture in 2017, is centered around a young black man named Chirone who is learning to balance his sexuality and torn family dynamics in a drug filled neighborhood in Miami.

Jenkins said in the current political climate that is loud and noisy many things are being hidden. Silence can become very powerful when it is juxtaposed against something that is very loud, Jenkins said.

Justino Flores, lab manager for the psychology department at UC Riverside, said the film “Moonlight” resonated with him personally.

“As a gay man of color my experience is different than a gay white man,” Flores said. “To see that manifested through film was so important.”

Flores, also program director for the San Bernardino LGBTQ Center, said it is important to point his community of color to films that represent their identities like in “Moonlight.”

Jenkins said women are still fighting for representation and acknowledgment in the film industry.

Not a single woman was nominated for best director at the Oscars, yet Jenkins said he can name at least three films created by women that were as good as anyone else produced.

“Nobody in the world can exist without a woman and yet woman make only 4 percent of studio directors,” Jenkins said. “Do we think women can’t write as good as men? Hell no. Do we think women can’t direct as good as men? Hell no. So what is happening? The system is designed to disenfranchise people so we have to keep dismantling the systems in place.”