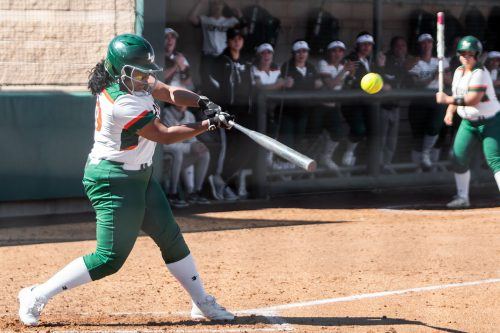 La Verne senior outfielder Sienna Kendricks bats during the bottom of the sixth inning Saturday at Campus West. The Leopards won the first game, 6-4, and lost the second, 4-2. They will face the Berry University Vikings on March 10 at noon. / photo by Ariel Torres

Defense and pitching were the story for the Leopards as they split a win with the Redlands Bulldogs in the Southern California Intercollegiate Athletic Conference softball doubleheader at Campus West on Saturday.

The win and loss gave the Leopards a 3-1 record in SCIAC competition and a 6-2 overall record for the season.

The Leopards struck first in game one when sophomore first baseman Gabriella Underwood crushed a solo home run over the left center field wall in the bottom of the first inning.

“I was just thinking that we need to score first, we’re 0-0, we’ve got to get on top, and I have to help my team score a run to keep winning,” Underwood said.

A triple from freshman outfielder Hayley DiMase, followed by an RBI single to center field by senior catcher Nova Siegel, allowed Redlands to tie the game at the top of the third inning.

Most of the Leopards’ strong defensive performance in game one can be credited to the arm of junior pitcher Katheryn Navarro, who pitched a complete game with seven strikeouts in game one.

Redlands was able to rally back in the sixth inning after sophomore infielder Ryanna Curtis drove in two runs on a base hit while subbing in as a pinch hitter.

The Leopards responded offensively in a big way at the bottom of the sixth inning with Kendricks, junior outfielder Kayla Giannatasio and junior third baseman Justice Borden contributing four runs to put the Leopards up 6-3.

Redlands loaded the bases in the seventh inning but were only able to drive in one run.

A combination of Navarro’s pitching and great defense allowed the Leopards to run away with the victory in game one.

Redlands started game two by loading the bases early in the first inning, similar to the first game’s conclusion.

After walking sophomore outfielder Sam Rivas, and advancing Ryanna Curtis on a hit by pitch, the Bulldogs took a 2-0 lead.

The Leopards tied the game at the bottom of the first inning after a base hit to left field from Garcia, which allowed Navarro and Underwood to reach home plate. Unfortunately, the Leopards offense would stall for the remainder of the game.

Siegel succeeded in driving in the go-ahead run in the second inning to give the Bulldogs a 3-2 lead.

Defense and pitching would take over for the next five innings of the game.

“I feel like I did as much as I could in this game,” Rojo said. “At some points I felt like my hands were tied. It was either sink or swim, and I had to swim with this one.”

Despite attempts to rally back throughout the game, the Leopards could not drive in the runs needed to stay in the game.

Interim head coach Henry Moranchel believed that his hitters were not dialed in on the right pitches, which contributed to the Leopards’ offensive woes.

“They wanted to go for the home run on every single [pitch],” Moranchel said. “If they can go ahead and dial it down a little bit more and realize that it’s one at a time, then I think we will be a lot more successful.” Moranchel said.

The loss ended a six-game winning streak for the Leopards.

Despite the loss, players like Navarro are confident they will improve from on their performance in both games.

“We learn from our losses, honestly we will bounce back and come back better than what we did this weekend.” Navarro said.

The Leopards move to a 6-2 overall and 3-1 record in SCIAC. The team hits the road Saturday to take on Occidental at noon and 2 p.m.