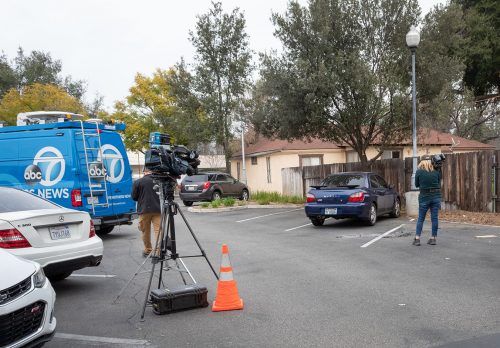 News crews surround a student’s car Friday morning after it was set on fire. The incident occurred in Parking Lot H2, near Barkley Annex and Leo Hall. La Verne Police Department is investigating the incident as a hate crime. / photo by Jaysin Brandt

Classes were canceled at the University of La Verne this afternoon after Campus Safety received a report of arson and theft in Parking Lot H2 beside Barkley Annex and Leo Hall this morning, following a report of a racist threat made against two students via Instagram yesterday.

The threat came from an anonymous account. The suspect has not been identified, but the La Verne Police Department has opened an investigation into the incident.

University President Devorah Lieberman and Provost Jonathan Reed sent an email at 10 a.m. addressing the threats and informing the campus community about a planned suspension of classes on March 7  from 1 p.m. to 5 p.m. for a day of diversity, equity and inclusivity dialogue, workshops and training.

Just a half-hour later, the ULV Alert system sent a campus-wide notification regarding the arson and property theft incident in Lot H2.

Josiah Manzanares, sophomore broadcast major, said a Hispanic female student in the parking lot asked to use his phone to call for help regarding her car around 8:30 a.m.

“She asked if she could use my phone so she could call the police or fire department, or campus safety,” Manzanares said. “I gave her my phone, and then a campus safety officer came by and she flagged him down. At first I thought that it was a fried battery or something but there was smoke coming from every opening of the car.

“I left to go to class, and later got the email about what happened in the parking lot,” Manzanares said. “I just hope everything is okay with her because this is intolerable, especially at a school where we preach diversity and inclusivity and then this happens.”

Senior history major Paril Patel said he feels there is a connection between Decolonize ULV’s protest efforts and today’s incident. Decolonize ULV, a student group, has been vocal recently demanding that the University address issues of institutionalized racism and bigotry. The group held a protest last week.

“We see things that are happening now where students of color –  more particularly women of color – are facing heinous crimes of hate,” Patel said.  “Threats are being made, and these threats are very serious, especially when arson is (involved and) stuff is set on fire.”