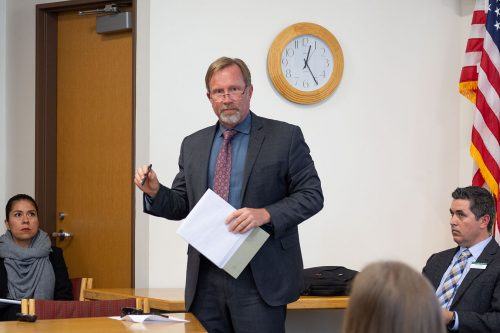 Provost Jonathan Reed addresses the Faculty Senate meeting Monday in the Howell Boardroom. The meeting included a discussion of what precautions are being taken by the university due to last week’s social media threats and arson, as well as to take any questions from faculty members about what they should be doing in the classroom. Reed said he felt it necessary to make sure that everyone in the room recognized that the University would not tolerate racism and that an act against any student was an act against the University as a whole. / photo by Kayla Salas

In response to last week’s apparent hate crimes –  a racist threat on social media directed at a specific group of students, followed by arson in a student’s car – several students rallied in Johnson Family Plaza to condemn these actions, while faculty discussed the appropriate response at the Faculty Senate meeting Monday.

Tyler Anderson, senior speech communications major, was one of 10 students who spoke at the rally, urging community action.

“I would love to give money to my University, but I refuse to do that if they don’t address issues for students of my community,” Anderson said. “Whatever the University has to do in order to change the narrative, if they need to fire some people, if they need to make some adjustments, let’s make some adjustments. I would really love for things to be changed drastically, because I would still love to be an alumnus of La Verne and take that into the world with me and not feel like that’s something that’s attached to a hate crime on campus. That should not be the legacy of my degree.”

Classes were canceled Friday after Campus Safety received a report of arson and theft in Parking Lot H2 beside the Oaks dormitories. This followed a report Thursday of racist threats made against two students via an anonymous Instagram account. The message included a photo of students protesting racism on campus, and indicated that the sender knew students’ routines, including where they live and where they park their cars.

Samantha Mckinney, senior criminology major, said she planned the public meeting after what she considered a lack of administrative support following the racist threats and vandalism directed toward a student.

“I come from Alabama. I come from somewhere deep in the south and this type of sickening behavior? I’m used to it,” said Chavon Jackson, sophomore computer science major, who also spoke at the noon rally.

“I’m used to seeing racist people all the time, but I felt safe on this campus. To see somebody burning a car, I was like, ‘That’s too close to what I’m used to where I’m from.’”

As of Friday, the Phi Delta Theta fraternity and the student protest group known as Decolonize ULV were issued a “no contact” order because of the ongoing investigation into last week’s crimes, Campus Safety told faculty in an emailed notice Friday.

The order was issued because of speculation that members of the fraternity may be connected to the crimes.

Several members of Phi Delta Theta attended the rally, including President Justin Parnell, who spoke to the crowd.

“No matter which side you’re on, and no matter who’s being affected… administration is not listening to students,” Parnell said.

The repercussions of the hate and safety issues on campus affect alumni as well.

Graduate student Trevor Welch referenced a lack of action in response to an armed robbery that occurred in February of 2016.

“To my knowledge there are no cameras at all in the Oaks parking lot, correct?” Welch said. “Wasn’t that the same parking lot where they had to shut the school down because someone got mugged, like two years ago? They still didn’t make any changes after that incident? They really don’t care, like I said.”

“That’s exactly why we have to utilize this space to try to find an environment in which we are comfortable talking to the university as students,” Anderson said. “And we need to be comfortable directing that conversation, because ultimately we’re going to be the ones affected.”

Following the rally, two student protestors went across campus to the Faculty Senate meeting to express their concerns with the lack of administrative response to last week’s incidents. They shared a list of demands for cultural competency and diversity training for all faculty and staff that has been in circulation from Decolonize ULV across campus since fall semester, before the roughly 40 faculty and administrators at the Senate meeting.

One of the two said she was uncomfortable being on campus. Not only was she terrified because she was among the group directly threatened in the Thursday social media post, but also because the administration did not do enough to keep her and the other students safe, said the student, who asked that her name not be published for safety.

“The people who were threatened were queer students, students who were disabled-bodied, they were all of these other identities,” this student said. “It is a bigger conversation. And people who (work here need to) understand diversity and the multiplicity of things, and (to be) aware of how they are teaching students on campus.”

She added that she hopes the Senate will take seriously the student demands in light of the apparent hate crimes on campus.

“We were trying to tell you that there are discriminatory acts happening on our campus,” she said. “Some of the things in your coursework are not helping with the lack of cultural competency. And now we have students that are doing what they are doing.”

Issac Carter, assistant professor of education, agreed that the University needs to do more to support the diversity initiatives.

“I don’t think the demands are particularly overreaching because they’re common in institutions,” Carter said. “I think the University is struggling with this change because it requires them to address long standing things.”

The student who spoke to the Faculty Senate said she was not contacted by University administration until 24 hours after her life was threatened last week.

“I am not really hearing anything from administration on what I can do to protect myself,” this student said. “This has been going on for years at this institution, at least as long as I’ve been here, where I’ve been traumatized or triggered, and when I try to tell people I am invalidated.”

Provost Jonathan Reed condemned the apparent hate crimes of last Thursday and Friday. A threat to one individual on our campus is a threat to all faculty, staff and students, Reed told faculty, students and administrators at the Monday’s Senate meeting.

“I would like to stress for us white folks that we learn to appreciate the depth of pain and fear that this has caused to people of color in our community.”

Reed said people of color have told him from their lived experience that lynching was never directed to one individual but directed to the entire community to create fear and stifle discussions.

“I have heard a lot of people say things like, ‘Well this is isolated, this is a hoax and it is not a big deal,’” Reed said. “I would really encourage white folks to listen to students and faculty of color and to gain some appreciation as to why this is such a serious event and why it has caused such an issue in our community.”

The University will cancel classes from 1 p.m. to 5 p.m. Thursday as a time for reflection and community development.

“I would really urge if you are thinking this is an overreaction to talk to some other people and get their perspective,” Reed said. “This is an attack on academic freedom. When people fear their ability to speak out and when people are afraid of having the classroom be a place of civil discourse.”

Reed said the investigation into Thursday and Friday’s crimes is now in the hands of the La Verne Police Department and that, when identified, the alleged perpetrators of the hate crimes would be immediately expelled from the University.

However, some faculty members said that a stern warning in a faculty meeting was not enough.

“We just learned now (from Reed) if indeed we do find out who did this, they will be expelled,” said Valerie Cummings, associate professor of broadcast journalism. “I have not seen anything anywhere that sends that message out to the students. The students who are doing this are not going to go to the vigil, they are not going to the workshop day. So as far as they know there are no consequences except from the police.”

Ruben Ibarra, new director of University safety operations, said La Verne Police Department is taking this investigation very seriously and have brought in detectives from other task forces to assist in the investigation.

“Currently when it comes to that investigation I don’t have any control whatsoever,” Ibarra said. “I’m a civilian now. However, La Verne (Police Department) is very cooperative, and will assist or provide as much information as it can without jeopardizing their investigation, which is the most important part. We don’t want to jeopardize their investigation.”

“It’s a hate crime. It shouldn’t happen on your campus,” Carter said. “I hope that in the wake of this, we will as a campus prepare and think through how to handle another situation like this.” 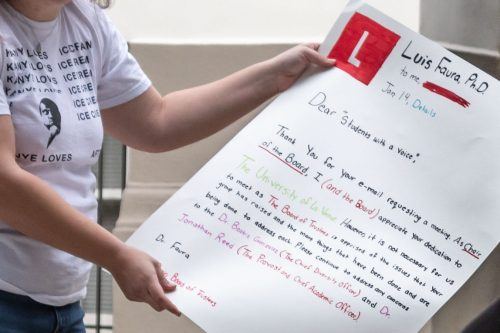 Students participated in a rally Monday to stand up for students’ rights and safety. One student in particular spoke about how Board of Trustees Chairman Luis Faura refused a request by members of Decolonize ULV to meet with the Board to discuss student concerns. The speaker’s sign was a reproduction of Faura’s email declining the students’ request. / photo by Jaysin Brandt

One Response to University grapples with aftermath of apparent hate crimes