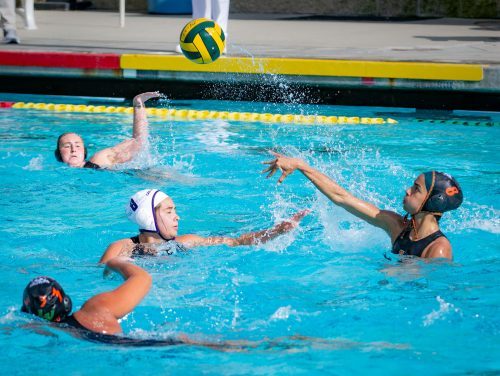 La Verne senior attacker Guarina Garcia throws past Cal Lutheran senior attacker Mardell Ramirez at the beginning of the first quarter Tuesday at the La Verne Aquatic Center. The Leopards lost, 13-12. Garcia would record two goals, an assist and a steal in the matchup. / photo by Molly Garry

The women’s water polo team looked to upset undefeated conference rival Cal Lutheran Tuesday at the La Verne Aquatic Center, but fell short in a hotly contested game that went down to the last second.

Cal Lutheran would take the game, 13-12, in an offensive shootout.

With all of their Southern California Intercollegiate Athletic Conference games decided by four points or less and a strong 14-7 showing against Caltech, the women looked to take it to the Regals early.

“Cal Lu doesn’t do anything fancy but they do everything well,” head coach Pat Beemer said. “I’m proud of how we battled because we weren’t intimidated by them and it showed, we were ready to bust them in the face right away.”

The second quarter was similar to the first, except it was the Regals that had to battle back in a three goal run. Despite goals from Guerrero and senior attacker Victoria Mezack, the Regals were able to claw their way back, ending the half tied at 6-6.

“At the beginning we did everything we had been practicing and then we got caught up and by the second quarter we weren’t executing on what we practiced; it was choppy and we weren’t moving,” Guerrero said. “So what we did in the first quarter didn’t transition over to the second.”

The third quarter was much of the same offensive battle that persisted throughout the game, as whenever La Verne would take the lead, Cal Lutheran would be quick to answer back.

“Some of the girls get caught up playing their spot and they don’t realize what’s going on behind them,” Guerrero said.

“When you’re in there for the whole entire eight minutes of the the quarter, going back and forth it’s easy to mentally check-out,” Kezman added.

Kezmen leads SCIAC with 40 goals, with she and Guerrero tacking on four goals each during the game.

Coming into the fourth quarter tied at 10-10, neither side wanted to blink first. Garcia would draw first blood in the quarter off an assist from freshman attacker Sage Knowell to take the lead, 11-10.

However this lead was short lived as a penalty shot from Regal utility Nikki Roed would tie the game back up. Next, the Leopards were caught out during the Regals’ counterattack, leading to a Cal Lutheran goal, giving them a one point lead.

With just over two minutes remaining, the Leopards were in a position to tie.

Fortunately, Guerrero would come up huge, shooting one in to tie the game back up at 12-12.

However in the last minute, Regal utility Kaitlin Gardhouse would score during their counterattack, ending the game at 13-12.

“I think that we played a hell of a game today. It was really fun playing those games compared to the other ones, just because now I think we’re finally coming together and this is our transition point to step up to the next level to compete,” Kezman said.

With the loss, the Leopards drop to 3-8 overall and 1-3 in SCIAC. But given how close its recent games have been, Beemer feels the team is close to its potential.

“From last year to this year we’re essentially a brand new team. We’ve worked through a lot of our growing pains and I think the girls are now bearing witness to what we’re capable of doing,” Beemer said.

The team’s next game will be at home versus Claremont-Mudd-Scripps 11 a.m. Saturday.