By Campus Times Editorial Board, Danielle De Luna on March 29, 2019 in Editorials, Opinions 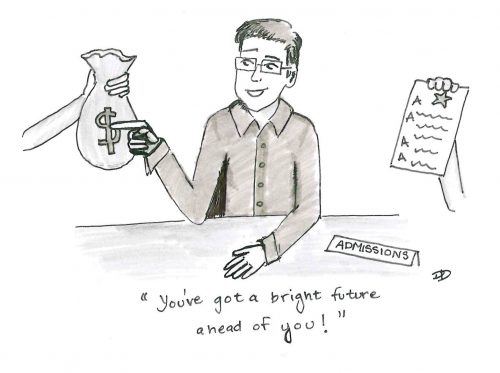 Nearly two weeks ago, a scandal brought to the forefront a prime example of what power, status and privilege can buy: an acceptance to the most elite colleges in the country like Yale, Georgetown and the University of Southern California.

Federal prosecutors charged 50 people, including top CEOs, Hollywood actresses, and a legendary fashion designer for apparently taking part in a scheme to get their kids into prestigious universities through a combination of bribes, fraud and blatant lies.

The government has indicted dozens of parents, college administrators and coaches involved in the scheme.

Those named in the lawsuit have also been charged conspiracy to commit mail or wire fraud.

Although the idea of the wealthy and privileged having an upper hand in the social and economic system is not a new concept, this shines a light on the disparities that had existed, in lesser, or criminal, ways for so long.

A huge part in the scandal included parents photoshopping their kids’ faces on athletes or staging fake athletic events to claim their children participated in the sport, and even paying to have their children’s’ SAT answers manipulated by paying for an individual proctor session.

It is no secret that being wealthy comes with major perks.

And apparently for the price of up to $1.5 million, parents can buy a five-year, full-service package of college admissions consulting from a company in New York City called Ivy Coach.

According to Inside Higher Education, 42 percent of private colleges and universities and six percent of public schools take into account whether an applicant’s family members attended that school.

The system is set up for the rich, white privileged families and proves that money can really buy anything. In this case anyway, until you are caught.

This scandal is a slap in the face to the millions of relentlessly hard-working students who have to persevere on individual skills, without the stepping stool of money, to gain the same opportunities as these privileged families who cheated their way into the system.