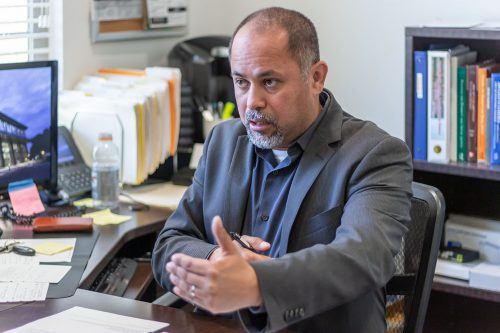 Juan Regalado, dean of students, discusses homelessness and poverty in the University community Monday. He offered suggestions such as changing meal plans on campus. Additionally, he talked about the food pantry, which gives food to students in need, and the food donations to Chefs End Hunger organization, which the University does as a means of addressing food waste. / photo by Ashley Villavicencio

One in three students at the University of La Verne is not certain where their next meal will come from, according to a survey conducted by five students in the University’s honors program.

The survey received approximately 200 responses and revealed that one third of students who attend the University of La Verne are currently experiencing food insecurity.

“The survey was targeted toward ULV students to find out how they feel about meal plans, food insecurity and understand their living situations,” Nguyen said “I was really surprised to find out that there are students that are homeless, though, especially at a private school.”

Two respondents indicated that they were homeless, and another referred to living in their car, according to the survey.

A study conducted by Temple University and Wisconsin HOPE Lab revealed the extent of these issues across America. Their data showed that 36% of university students were food insecure, 36% were housing insecure and 9% were homeless.

“It’s hard enough to go to college,” Kwon said. “Think about it this way: when I went to school, very few people had to have jobs to maintain enrollment. But now, student loans are ridiculous, and think about dealing with homelessness on top of that.”

Homelessness among college students has become a state concern, as California legislators recently proposed a bill that would allow community college students to use campus parking lots to sleep in their cars overnight.

The ULV student group is also attempting create change to address the financial needs and insecurities they observed through their survey.

They honed in on the issue of food insecurity due to its prevalence at the University and across the nation, Nguyen said.

“What we really wanted to try to do was create a system where we can make use of all the meals that are being cooked in the dining hall,” Nguyen said. “Not everyone uses all their swipes for their meal plan every week and I’d really like to be able to make a system where those unswiped meals can go to students who need it.”

Approximately 50% of survey respondents agreed that weekly meal plans should allow students to share their meal swipes with others in need, Ehara said.

“We got a good amount of support through the survey,” Ehara said. “It was really nice to see that people were like, ‘That’s a great idea,’ but some were like ‘Bon Appétit won’t go for it.’”

As computer science majors, Nguyen and Ehara were interested in understanding how meal plan data is stored and used in order to find out whether a meal swipe bank might be a viable solution to food insecurity.

“My pitch is that this is a way to eliminate food waste,” Ehara said. “What I want to look into is how the data is stored and how that can be changed. How does the system work?”

Living on campus means buying a meal plan appropriate for your lifestyle. Dean of Students Juan Regalado says the weekly meal plan options available to residents are cheaper than block plan options because they take unswiped meals into account – but the prices are still steep for some students.

“I did the math, and people who dorm pay like $11 to $12 a meal,” Ehara said. “I wasn’t using all 10 meals per week and I tried to find a way that I could get a cheaper meal plan, because I was trying to cook more often, but they [the housing office] wouldn’t go for it.”

Regalado, who helps oversee the department of Housing and Residential Life, said the University has taken many steps within the past few years to address financial hardships and insecurity.

“We have different systems such as the food pantry that have helped us to help students in need,” Regalado said. “We started with an anonymous donation of $10,000, and Bon Appétit matched that donation with a grant. We’ve been able to serve about 80 people per month on average.”

Although food waste was a concern for the honors group, less than 10% of meals go unswiped, Regalado said.

“If there’s any food left we send it to an organization called Chefs End Hunger and they provide it to different agencies in the area,” Regalado said. “Or it may be used as compost.”

However, Trista Rios, junior kinesiology major and Bon Appétit student worker, said that she is uncertain whether excess food is donated.

“We have to ask the cooks what to do with the food at the end of the day,” Rios said. “They have us store whatever we can use for the next day, so that might be donated. It might be catering that donates the food too. As far as I know, we make use of it here or they just toss it.”

The University is still looking for more ways to serve students in need, Regalado said.

“We’ve been looking at what some other universities and Cal States are doing,” Regalado said. “My main concern is that we don’t just put a bandaid on the problem, but look at a student’s whole situation and give them help everywhere they need it.”

Nguyen said he hopes that his group’s meal swipe bank proposal might be a part of a broader solution. The group plans to present a petition to the committee that discusses dining services next month.

“We drafted a petition because we don’t agree with the current system in place to address food insecurity,” Nguyen said. “We want to see more transparency from Bon Appétit concerning meal plan options and give people the option to donate to other students, so they can have more direct control over the service they are paying for.”