By Katelyn Keeling, Nicolette Rojo on April 12, 2019 in News 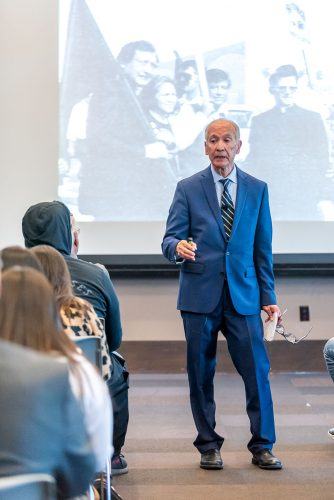 Around 50 people showed up to hear Distinguished Professor of Chicano Studies and History Mario T. Garcia’s lecture about his recent book, “Faith, Politics and the Origins of the Sanctuary Movement in Los Angeles” in the Campus Center Ballroom Wednesday.

Garcia, who currently teaches at UC Santa Barbara, spoke about his biography of Father Luis Olivares, a leader in the Los Angeles sanctuary movement during the 80s.

The city was officially declared a sanctuary city on Dec. 12, 1985, to honor the traditional Mexican celebration of the Virgen de Guadalupe, a saint in the Catholic Church.

Garcia began the talk by describing how Central Americans were not welcomed by the Reagan administration, which first labeled them as “illegal aliens.” However, local Americans welcomed the refugees.

Luis Olivares was one of them.

“It was so important because many of the Central Americans would come to Southern California, especially to Los Angeles,” Garcia said.

“(We) saw them as children of God. They are an image of God and we are going to accept and embrace them.”

He enrolled into a Claretian seminary in high school, finished his studies at Catholic University in Washington, D.C., and was ordained in San Antonio after 13 years of training.

“He already showed leadership talent, had a charisma to him, and rose very quickly in the Claretian order.”

He was quickly named treasurer of his order, catching Wall Street’s attention but his whole demeanor and perspective on life changed after meeting Caesar Chavez in 1975.

“His life changed and went through what he called his conversion in 1975,” Garcia said.

He followed up with a quote by Olivares, reading that “it made (me) rethink what I was doing and the route I was taking as a priest. It reminded me of my family, helping poor and oppressed people; this is what my family wants of me.”

In 1981, Olivares reached out to the refugees. He moved to La Pacita Church at Our Lady Queen of Angels in downtown Los Angeles, where he welcomed them to live there and declare sanctuary and safety.

Garcia explained that during the 1980s, over 400 churches and mosques declared themselves as sanctuary, including the state of New Mexico.

In 1980, over 100,000 Salvadorians left El Salvador because of the turmoil of their civil war and implementation of martial law to citizens.

When Olivares moved to La Pacita in 1981, 50,000 Guatemalans immigrated to escape the civil war.

Four American religious workers were captured by the Salvadorian army and all killed. Garcia said that there are no books or primary sources of Father Olivares, so he had to do all the work, by holding over 80 interviews.

Olivares lived in Los Angeles for the remainder of his life and died in 1993 after battling AIDS for three years.

The talk ended with a Q&A session, reception and a book sale and signing.