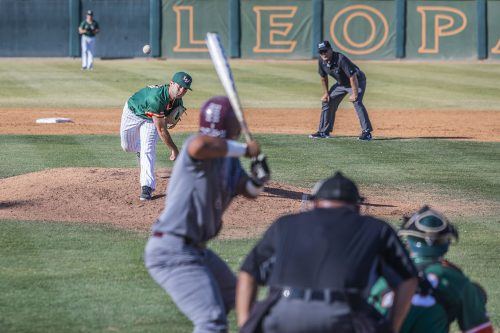 The Leopard baseball team continued their winning streak in a convincing victory over Redlands, shutting out the Bulldogs 8-0 in a Southern California Intercollegiate Athletic Conference match up at Ben Hines Field on Friday.

The Leopards would go on to win the next two games in their series against the Bulldogs 8-2 and 8-7, completing the sweep and extending their win streak to nine games. The team now improves to 13-3 in SCIAC and 23-8 overall.

The game started out slow for both teams as neither team would register a hit in the first inning.

The slow start ended in favor of the Leopards.

In the second inning, junior catcher Adam Santa Cruz got the ball moving with a double to left center field.

Santa Cruz advanced to third base after a called balk on sophomore pitcher Chris Fousek Jr.

For the second straight week, a call by the umpire prompted the opposing manager to argue the call. The result was the ejection of Redlands head coach Aaron Holley.

With Santa Cruz in scoring position and with no outs, all it took was a sacrifice fly by senior utility player Christopher Peres to advance Santa Cruz to home and give the Leopards their first run of the game.

Redlands finally got their first hit of the game in the third inning with a single, hit by senior infielder Eduardo Martinez-Razo. Redlands could not muster any further offense for the rest of the inning.

Things only got worse for Redlands at the bottom of the third inning when the Leopards offense exploded for five total runs.

The goal for the Leopards offense was to rattle Fousek’s confidence and take him out of the game early.

“I think we all played well as a team, I think we all had the same mentality,” Ligot said. “We really wanted to get into the bullpen and get that guy out of there.”

The Leopards continued to add to their lead in the fourth inning as junior third baseman Tanner Browning was able to reach home during a Santa Cruz ground out double play.

Ligot added his second RBI of the game by advancing Peres to home on a single to left giving the Leopards an 8-0 lead.

As the Leopards offense began to cool down for the remainder of the game, all eyes focused on junior pitcher Cody Norman who continued to shut down any offensive momentum that Redlands tried to build.

“I was just bearing down and making good pitches when it mattered most,” said Norman.

Redlands added a little drama to Norman’s complete game shut-out bid as senior first baseman Brendan Moore was able to work his way to third base in the ninth inning.

Peres made a great defensive play late in the game by catching a fly out in right field from Martinez-Razo, then showed incredible arm strength by throwing the ball back into the infield to keep Moore on third base and preventing any runs from being scored.

“I think I helped my team more on defense than on offense,” Peres said. “I tracked down some tough balls in the gaps and down the line. I think my energy carried over to help the team win this game.”

Norman went the distance pitching all nine innings and allowing zero runs off of nine hits.

“We did a lot of things well today,” said head coach Scott Winterburn. “We got a great pitching performance from Norman… we had some really good defense, real good pitching and some timely hitting.”

With the series win against Redlands the team completed their second straight sweep against a SCIAC opponent.

Santa Cruz lead the team through the sweep and has proved to be invaluable to the team in the past few weeks. Santa Cruz went 8-13 at the plate in the series, scoring five runs, a home run, a double and racked up six RBI throughout the contest.

Santa Cruz’s 41 RBI leads SCIAC, with Peres in second with 38. The junior catcher also ranks third with 47 hits and his .409 batting average.

For his winning efforts, Santa Cruz was awarded the SCIAC Athlete of the Week honors on Monday.

Sitting in a tie for second place with Occidental, with two of their next three series against non-top-four teams – Whittier and Claremont-Mudd-Scripps – the team is in firm control of its postseason destiny.

The Leopards hope to keep their hot streak alive as they hit the road to take on conference foe Occidental in a three-game series starting at 3 p.m. Friday, where the team looks to attain sole possession of second place behind Chapman.