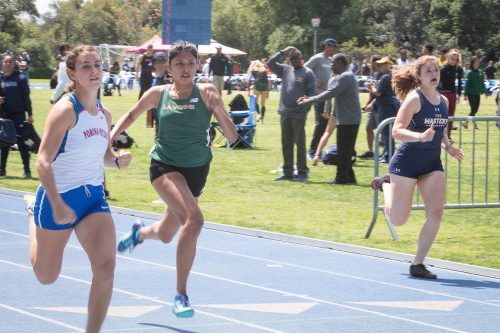 La Verne freshman Marissa Perez finishes third in her 100 meter heat at the Pomona-Pitzer Invitational Saturday. Track and field teams from around the world gathered at Strehle Track to compete in the invitational. / photo by Jaysin Brandt

The men’s and women’s track and field teams competed in the Pomona-Pitzer Invitational Saturday against many other schools like Pepperdine, Ohio State and Occidental.

Senior Melissa Cerrillos set a new school record in the 3,000-meter steeplechase with 10:54.62, breaking her previous time of 10:55.51, earning her SCIAC Athlete of the Week honors.

Many of the other Leopards were also looking to achieve new personal bests as they approach the end of their season, with the Southern California Intercollegiate Athletic Conference championships right around the corner.

“There has been a little bit of a shift in our training because we are in the month of April which SCIACs are at the end of the month,” assistant coach Justin Wood said. “So I think intensity has increased and volume has come down which all kind of coincides with end of the year championship style performances.”

“This past week it was a little bit more intense, and we are focusing on (our) personal bests and getting better each meet,” junior middle-distance runner Mackenzie Bell said.

The shift in training resulted in many of the Leopards’ runners placing in the top three in their heats.

“I was trying to get a sub 5:10. I knew I was going to be in the front pack because my heat was a little slower,” Posada said. “I was just thinking about going hard and pushing my fastest to the third lap and fourth.”

The Leopards are looking to qualify for nationals, which take place May 23-25 at the SPIRE Institute in Geneva, Ohio.

“We really tried to focus on just getting fresh, especially for 4×400 we want to qualify for nationals and get our ranking back up in SCIAC,” junior sprinter Terrence Robinson said. “We went pretty light this week so we would be fresh for today.”

“It’s definitely rewarding the work we have been doing in (Division III) at La Verne is finally paying off,” Posada said. “We have really great coaches who are getting us to our best potential and it’s just showing us when we really work hard, we have the ability to compete with (Division I athletes).”

Sophomore Matthew Salas for the Leopards looked to break the current 800-meter record of 1:54.10 after tying it last weekend on La Verne’s home track, but fell just short by coming in at 1:54.20.

“I’m probably most excited for the men’s 800 which our guy Matt Salas just tied the school record last week at our home track,” Wood said. “So the goal is to go after the school record today to break and run a personal best.”

La Verne is set to return to action at 10 a.m. Saturday for the SCIAC Multi Dual No. 3 meet at Whittier.