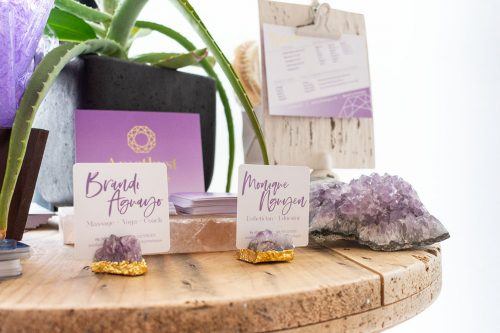 Amethyst Healing Spa owners Brandi Aguayo and Monique Nguyen decorated the space just as the name implies, with natural items such as plants, amethyst stones and Himalayan salt. The spa at 1768 Arrow Hwy, has $10 yoga sessions for students. / photo by Kayla Salas

The newly opened Amethyst Healing Spa on Arrow Highway and A Street in La Verne is small and quaint, but does not fall short on making one feel invited and at ease.

The spa is named after the purple stone, which is thought to have calming and restorative effects on one’s spiritual, emotional and physical planes. A short walk from the University, it opened March 1, equipped with yoga mats, blankets and hospitality.

The reception room is decorated with amethyst stones, plants, chairs and products for sale. The yoga room has a hand-made Himalayan salt wall, a main attraction in the room.

Before my yoga class began, an employee offered me and my friend complimentary tea, which was a small yet thoughtful gesture that added to the welcoming ambiance.

Skyla Gasper was the instructor of the restorative yoga class.

There were only two participants in the class, including me, which allowed for a more one-on-one experience.

Gasper began the session by playing relaxing music and putting essential oil in our hands.

Because of the small class, we were able to decide what type of focus on the body we wanted.

I chose to work on the upper body, which proved to be quite the challenge.

The class focused entirely on controlling the breath, being aware of where it was stemming from in the body and clearing the mind from anxieties and stress, which was effective.

Gasper was easy to talk to in between poses to ask questions about how to perform the poses, and occasionally she would put pressure on our backs to help elongate our poses.

The poses were more difficult than what I have previously experienced, but I believe that Gasper challenged us but did not put us in uncomfortable situations.

At the end of the session, we laid down, and Gasper rang a singing bowl. This drew our body’s senses and toward a deeper state of relaxation.