By Katelyn Keeling, Savannah Dingman on April 19, 2019 in News 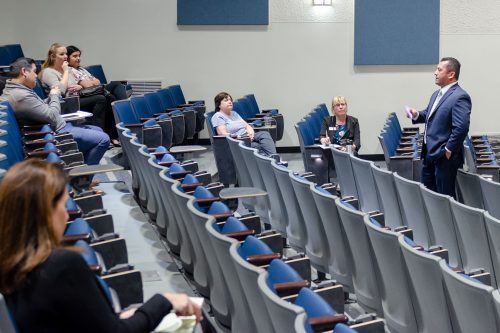 New Director of University Safety Operations Ruben Ibarra speaks to faculty and staff about his plans for campus safety during a meet and greet March 25 in La Fetra Lecture Hall. Ibarra is a former Santa Ana police officer. / photo by Katelyn Keeling

Before starting at the University last month, Ibarra worked for the Santa Ana Police Department for 27 years.

He made his way up through the ranks of the department. He initially rose to the position of field sergeant and eventually advanced to an area commander position, which oversees a population of roughly 160,000 people over 12 square miles.

Once the opportunity to retire presented itself, he decided it would be a good idea, but he did not want to stop serving the community.

“I wanted to do something different, but still related to what I was doing so I could utilize my experience and knowledge I’ve gained over the years,” he said.

Ibarra entered his position as the new campus safety director just before the arson attack and apparent hate crime occurred on campus. Ibarra was able to apply prior knowledge he gained in the police department in order to handle the situation sufficiently.

“I come from a very large and busy department,” he said. “As the investigations commander, I was used to overseeing very major crimes, so when this situation happened I was able to bring some of my experiences to be able to really address this issue,” Ibarra said.

The La Verne Police Department is conducting the current investigation.

While Ibarra ensures the La Verne police are working daily on the investigation, there is no further information on when it will be completed.

Ibarra assured his commitment to serving the students, and is hopeful about the current and future climate on campus.

“While this is a situation that concerns us all, overall, our campus is still very safe. Compared to other campuses locally, we are safe,” Ibarra said.

In order to continue to improve campus safety, Ibarra says students can play a big part in enhancing the safety on campus.

“The students can be our eyes and ears. If students see something suspicious, let us know so we can follow up” Ibarra said. “We all have to take care of one another, that’s going to be the way we keep our campus safe.”

To take additional steps to increase campus safety, the security department strongly encourages students to download the LiveSafe app on their mobile devices.

“If students are here late at night and need an escort from the library to their dorm, we will do that,” Ibarra said. “We are here to support the students in every way.”